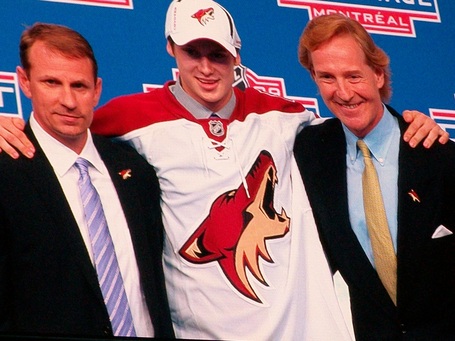 With the fifth overall pick in the 2009 NHL Draft, the Phoenix Coyotes selected Oliver Ekman-Larsson.  Five for Howling has more.

For a blueliner, he sees the ice so well and can dissect the developing play in front of him almost instantaneously. He has the puck skills to match and can fire a long tape to tape pass from almost anywhere accurately.
Shane Malloy
TSN

Ekman-Larsson is an offensive defenseman.  He isn't flashy, but keeps the puck moving efficiently.  Needs to work on filling out his tall frame. Could stand to polish his defense as well.
Hockey's Future

There is little doubt Ekman-Larsson has classic Swedish skills with the puck, both in terms of carrying the biscuit and moving it.  That he is the third-best Swedish defenseman in this draft says more about the skills of Victor Hedman and David Rundblad than Ekman-Larsson's shortcomings.