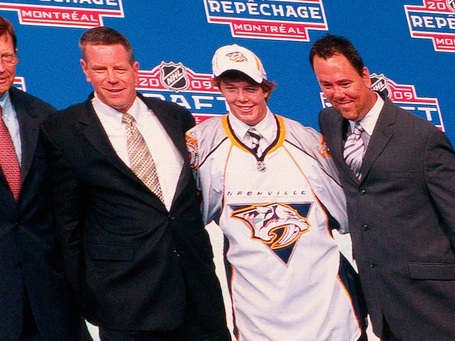 With the 11th overall pick in the 2009 NHL Draft, the Nashville Predators selected Windsor Spitfires defenseman Ryan Ellis.  He may not be the biggest kid at 5'9" but let's be honest - he's 18.  He can definitely grow, and if he does Nashville may have an even better defenseman on their hands then they'd anticipated with this pick.  On the Forecheck has more.

His hockey sense is elite by NHL standards and he processes information like a chess player - thinking three moves ahead. When it comes to having poise with the puck, very few - if any - are Ellis' equal.
Shane Malloy
TSN

Despite a pristine resume, Ellis was passed over until the 22nd selection in the 2007 OHL draft. He was passed over that season for the same reason why questions linger about Ellis' upcoming draft status -- his size [5'10"]

He is definitely on the small side by defenseman standards, but his ability to move the puck is something to behold.