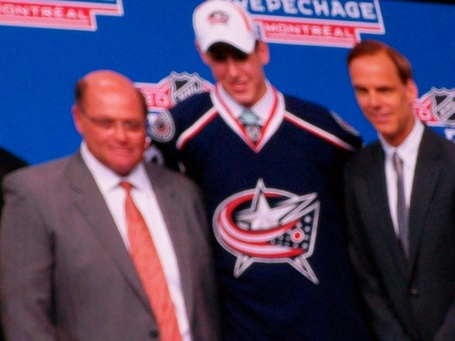 With the 21st overall pick in the 2009 NHL Draft, the Columbus Blue Jackets select John Moore.  Moore committed to Colorado College back in December 2007 so it's likely that his jump to the NHL will take the slow and steady course.  Jackets Cannon has more.

What really intrigues everyone is his excellent skating ability which could be one of the best in the draft. The fact that he can lead the rush and bypass forwards makes him a dangerous choice for any organization.

He is getting more confident carrying the puck and he has a good shot from the blueline.  His skill level is off the charts in the USHL, but it's his skating ability that will give him his best chance to play in the NHL.
The Hockey News

Moore has been methodical about his hockey development, working each offseason to improve deficiencies in his game, like his size, conditioning and nutrition.