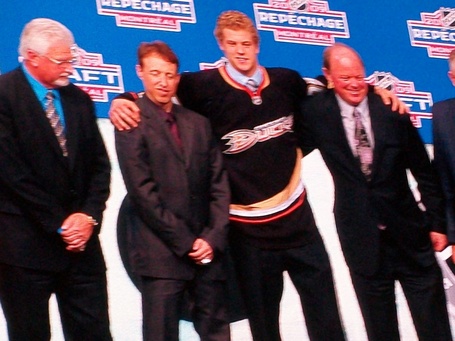 At the halfway mark of the 2009 NHL Draft, the Anaheim Ducks selected center Peter Holland of the OHL's Guelph.  It'll be interesting to see what position the Ducks decide to work with later in the round with the 21st overall pick they acquired in a Chris Pronger to Philly trade earlier in the night.  Obviously it would be hard to find a Chris Pronger-like player in this draft class, but a defenseman may not be out of the question.  Battle of Cali has more.

What some see as a lackadaisical attitude, others see as a more analytical mind on the ice.  And he has a talent level that can't be taught.

His shot is quick and accurate and Holland has shown he can score important goals with five game winning goals this season. Overall, his skating is very good and has enough quickness to pull away from defenders at times and the agility to deke around them.
Shane Malloy
TSN

Holland is not as big as [Zack] Kassian but still has time to grow and room on his frame to add weight. He has shown solid hands around the net and is noted for his ability to disrupt defensive sides with his forecheck.
Hockey's Future