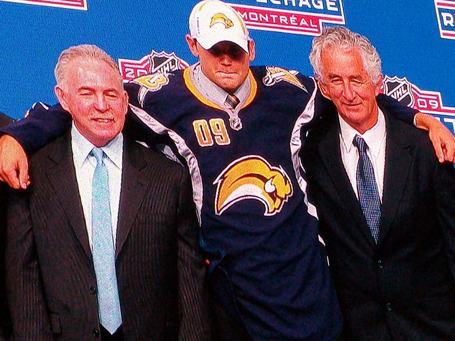 With the 13th pick in the 2009 NHL Draft, the Buffalo Sabres selected winger Zack Kassian.  Kassian carries a 6'3" frame and allegedly hits like the best of them.  He's already dubbed a hard hitter so it will definitely be interesting to see how he evolves on the NHL level.  Die by the Blade has more.

When he steps on the ice, he is always looking to make a check when the opportunity provides itself - and he hits to hurt. Do not let the rambunctious play distract you, since Kassian has some fine offensive skills at his disposal.

A lot of observers are throwing Milan Lucic's name around when they speak of Zack Kassian, right down to the fact Kassian's point and penalty minute totals this season are almost identical to Lucic's in his draft year.

He has imposing size and has shown a willingness to use it.  While he may not have as much offensive upside as other forwards at the top of the draft order, Kassian's total package of size, checking, and energetic play make him an appealing addition to a club looking for a top-six forward who can open up the ice for other teammates.