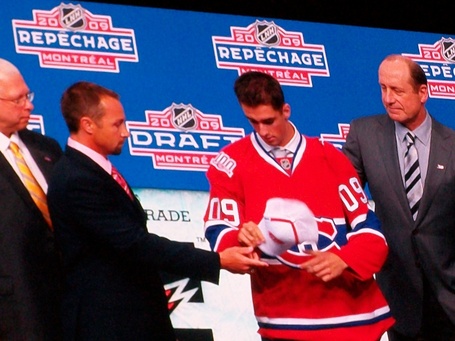 With the 18th overall pick in the 2009 NHL Draft, the Montreal Canadiens selected Louis Leblanc.  THN had him pinned at 29 but the Quebec native was an obvious pick for Montreal at this point in the draft.  The Montreal crowd roared with the decision and even let out some patented "ole ole" chants.  Habs Eyes on the Prize will have more to say on the pick.

His hockey sense is good and Leblanc has little difficulty playing with other elite players. Leblanc makes smart quick passes and uses his linemates exceptionally well off the rush or on the power play. Although his quickness and agility are pretty good, his skating will improve even more once he gains strength.
Shane Malloy
TSN

Leblanc impressed scouts by scoring a point per game in a league where players don't traditionally put up big numbers.  He also tied for the best plus-minus in the circuit at plus-33.  For his efforts, he was named the USHL's rookie of the year.
The Hockey News