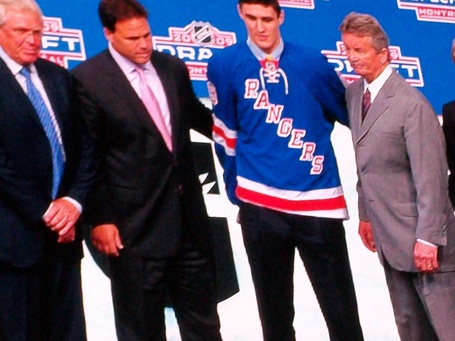 With the 19th overall pick in the 2009 NHL Draft, the New York Rangers selected left winger Kris Kreider.  Kreider gave his verbal commitment to join Boston College for the 2010-11 season and likely won't make a jump to the NHL anytime soon.  Blueshirt Banter has more.


WHAT PEOPLE ARE SAYING

One thing is for sure is that Kreider's skating is off-the-charts good.

A team will have to be patient with him for the next three seasons, as he will have to adjust to a different environment and digest a lot of new information. It will be interesting to see where Kreider plays next season. Any NHL organization will want him to move on to a more competitive league to accelerate his development.

At 6' 2", 200 pounds, Kreider projects to be a big player who has been compared him to Carolina's Eric Staal. There are some scouts who say his skating is already NHL level. All he needs to do is to play against stiffer competition in order to get better.

No video available, as is the case with most U18 kids.