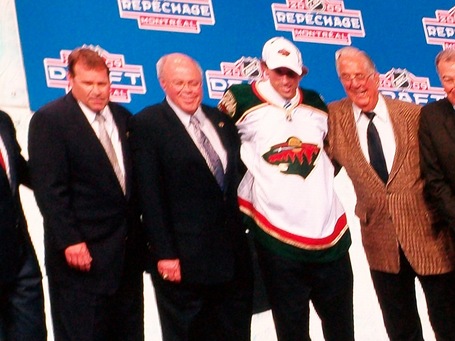 With the 16th overall pick in the 2009 NHL Draft, the Minnesota Wild select Eden Prairie defenseman Nick Leddy.  Now it all makes sense - I guess.  Leddy hails from Minnesota and landed pretty much where scouts expected him to.  The trade that the Wild made earlier with the Islanders (12) benefited them even more, especially if Leddy was already on their radar at 12.

Leddy, one of the premier players in Minnesota, opted to stay with Eden Prairie instead of heading to the USNDP this past season. His decision, and stellar play, helped the Eagles reach the state tournament for the first time since 2003.

Leddy is a strong skater who plays a reliable two-way game and will be counted on to progress at the University of Minnesota next year.  Players in Minnesota tend to stay in school all four years, so the theory is he'll be NHL-ready four seasons from now.