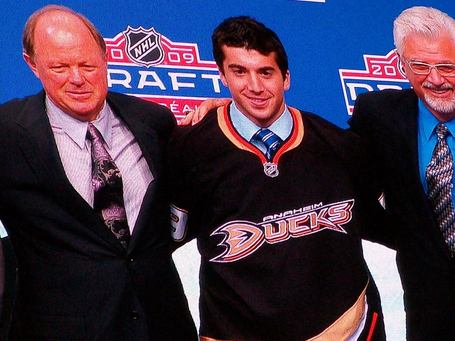 The Anaheim Ducks selected Kyle Palmieri with the 26th pick in the 2009 NHL Draft.  Palmieri was kicked off the US team for allegedly not coming forward with information about a teammate.  Who and what the situation was about remains pretty hush hush, but whatever the case it didn't really affect his stock in the draft all that much.  Head over to Battle of Cali for more.

He is said to be a hard competitor with good hands and vision. He can read plays well and has shown a knack for scoring when the game is on the line.
Hockey's Future

Palmieri is a very good skater with game-breaking potential and an ability to beat defensemen to the outside.  He's not a big player, but he is stocky with a strong core and solid work ethic.
The Hockey News

"I think Kyle's got a little bit of Chris Drury in him. I look at his passion, his natural skills and his tenaciousness, and that's what I saw in Chris. He's a lot of fun to watch because he has that vision along with a wicked shot."
Jack Barzee - NHL Central Scouting
NHL.com