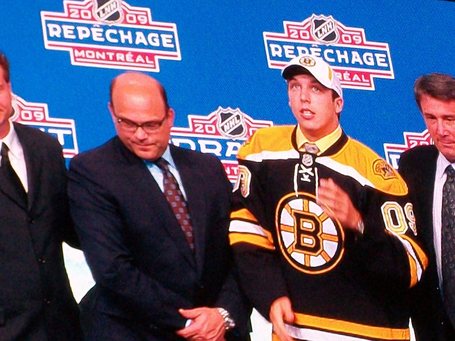 The Boston Bruins selected Jordan Caron with their 25th pick in the 2009 NHL Draft.  Caron has been riddled with a few injuries in the past but that's the sort of thing that comes with a crash-and-bang sorta guy who makes his living driving hard to the net.  Every mention of the Bruins is drawing boos from the Montreal fans at the Bell Centre but that changed dramatically when he exhibited a fluency in French. Stanley Cup of Chowder has more.

With his combination of size, skill and willingness to drive to the net, he has the attributes teams need in their lineup. His ability to process information in traffic is good and he shows enough hands to score around the crease.
Shane Malloy
TSN

One of the problems with Caron is he has dealt with significant injuries each of the three years he has played in the QMJHL.  But he has a good shot and soft hands for a big player who drives to the net.
The Hockey News

A battler on the ice, Caron excels at driving to the net either with the puck in hand or to knock in rebounds and deflections. However, that willingness to get his nose dirty has come at a price and not a year has gone by without Caron missing time with injury.
Hockey's Future

THE EVIDENCE
(Couldn't find any video highlights, but here's an interview he did with NHL.com)