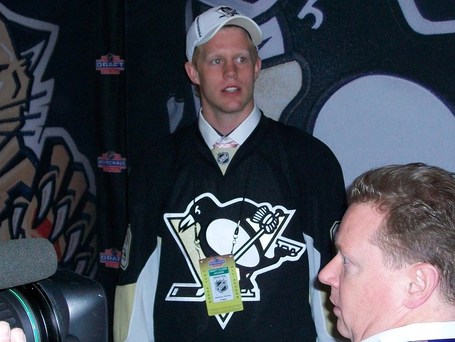 (Philip Samuelsson at the 2009 NHL Draft)

With the 61st pick in the 2009 NHL Draft, the Pittsburgh Penguins selected defenseman Philip Samuelsson.  Already the prospect has ties to the Penguins, as his dad Ulf Samuelsson picked up two Cup titles with the Pens in 91 and 92.  Samuelsson's game may not be that same bang/crash style as his father, but that's not a knock to his abilities.  Samuelsson 2.0 knows how to position himself defensively and is known for his ability to cause turnovers.  Philip admitted that his offseason plans include working on his skating, something both he and his father believe needs improvement.  He already issued a verbal commitment to play for Boston College next season where he hopes to hone in on his game and one day crack the Pittsburgh lineup.

Along with first round pick Simon Despres, the Penguins have stocked up on two young defenseman.  Despres is more on the offensive side of the puck while Samuelsson will look to knock the puck loose.  Could this be a sign that the team may be looking to restock Wilkes-Barre in light of a few pending call ups in 09/10?

Ulf and Philip audio will be up soon.