Genius doesn't borrow, it steals.  So when I see an advanced look at what the Washington Capitals lineup down the line, it makes me wonder what the Penguins might look like.

The first group is players actually under contract at the beginning of the 2012-13 season and the second group is mainly prospects (with a mix of some young current day NHL players) that ought to be in the sort for NHL jobs, barring of course trades/injury/odd developments. 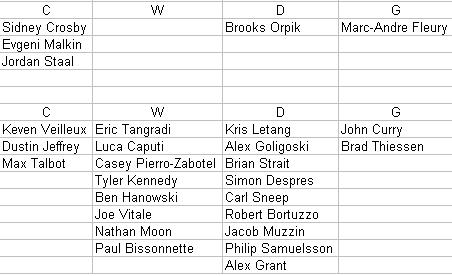 As you can tell, veteran guys like Ruslan Fedotenko, Rob Scuderi and Chris Kunitz -- guys that may or may not be around in three years were omitted.  This is basically a list of the past couple drafts sprinkled in with the odd Talbot, Goligoski or Kennedy that may or may not be around.
But that's what the future looks like for Pittsburgh....As long as there's Crosby, Malkin and Fleury in the mix, things are looking good.  The development of guys like Caputi, Tangradi, Veilleux and CPZ is going to make a huge difference as to whether the future Penguins can surrond their top guns with the talent to make consistent deep playoff runs.