Share All sharing options for: Mirtle and Seth beat me to it....Evgeni Malkin's historic post-season scoring

One of the things I had planned today was to chart in just what elite territory Evgeni Malkin is in for post-season scoring.  James Mirtle beat me to it, unfortunately (but on the bright side he did all the work!).  Below shamelessly is his chart. 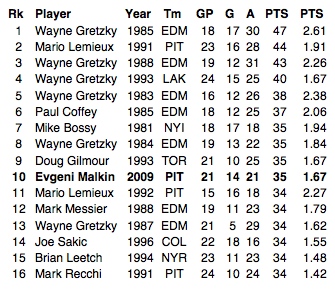 Some points that haven't been made that I can contribute:

The Hart and Lester B. Pearson awards for MVP have already been voted on. Which is a good thing for front-runner and presumptive winner Alex Ovechkin. Ovechkin had a superb season, he's a goal scoring dynamo and was awesome against the Pens....But right now Ovechkin is chillin in Russia while Malkin is approaching the Wayne Gretzky/Mario Lemieux stratosphere for points and sheer domination of games.

Malkin has also compiled a pretty sickening 276 points since the beginning of the 2007-08 season (including playoffs). Malkin's been perhaps the true "Russian Machine", as he's impressively played in all 205 games the Pens have played since then, scoring 106 goals and 170 assists in this stretch.  Sidney Crosby "only" has 233 points since the beginning of the 2007-08 regular season, mainly because he's only played in 171 of the 205 possible games. Ovechkin, no slouch himself, has 252 points in 182 games since October 2007.

Geno has been putting up an unreal number of points and is somehow only getting stronger this year late in the season, despite fading away last year.  If he keeps it up over the last 2-3 games of the season, Malkin will likely be in the Top 5 for all-time playoff scoring in a season season, in the elite Lemieux/Gretzky class.  And if Malkin keeps dominating he'll likely have his hands on two other trophies that surely any hockey player would trade the Hart and Pearson away for.