Share All sharing options for: Pensburgh drawing contest - vote for the winner

Six contestants have entered the first ever Pensburgh drawing contest and only one will win. The prize is a Stanley Cup DVD, so vote wisely. Take the jump to check out the entries followed by quick description before you make your pick. Voting ends tomorrow at 12pm, so get goin. 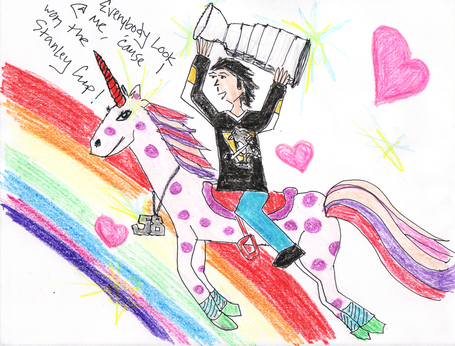 This is WrapAroundCurl's entry, the only known evidence of the real-life Kris Letang Stanley Cup celebration. The vibrant use of colors in the rainbow, matched by the explosive pizzazz of the unicorn, certainly doesn't detract from the Stanley Cup and token "58" bling strapped around the unicorn's neck. Wrap also wanted me to specify that they are not Starbursts over the uni's eye, but instead lens flares. Well done Wrap. 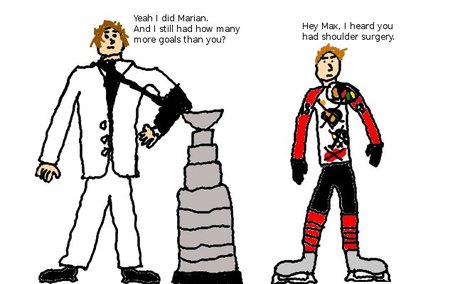 The Cheeseisblue is up next, depicting an ever classy Max Talbot in a white tuxedo following his offseason shoulder surgery. Note the player to the right, Marian Hossa, wearing his multi-team sweater with various logos etched and crossed out to signify his many stops over the past four years. Props for including buttons on Max's jacket. Nice work. 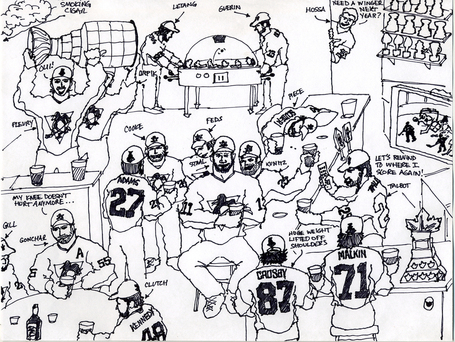 Sams_Dog takes the Stanley Cup celebration to a bar where 15 members of the team get their drink on. Unfortunately the picture couldn't be enlarged past this without sacrificing clarity (although try clicking on it and zooming). So to clear up a few points of this picture - Marian Hossa slips in during the celebration asking if anyone needs a winger while Letang and Guerin ignore him and play some hockey. Yes, that's Scuderi passed out on the bar while Max man's the remote control behind the bar to try and replay his goals over and over again (note the screen shot of the game on the TV). Way to go Sams_Dog. 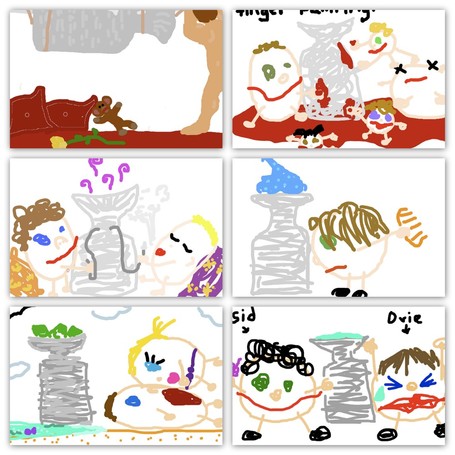 Lori chose to put together a bit of a collage. Here's the accompanying description:

Top Left: Some men put mirrors on the ceiling over their beds. Champion Maxime Talbot uses the reflection in the Stanley Cup. Hurry up, Max. The booty has just left Club Diesel and is on her way!
Top Right: Eric Godard has beaten the shit out of someone we can only assume had it coming (Probably a Flyers fan) and has invited the kiddies from the children's hospital over to finger paint the Stanley Cup in said Flyer fan's blood. Awwwh.
Center Left: Tyler Kennedy and Jordan Staal enjoy some much deserved R&R with the Stanley Cup. Not pictured: there's another herb that works just as well in a Stanley Cup hooka machine. Just saying...
Center Right: Kris Letang uses his reflection in the Stanley Cup to make sure his hair is juuuust right. He's also trying to keep Sidney Crosby from using all of his hair gel, again.
Bottom Left: Evgeni Malkin and his girlfriend get it on at the beach. She likes it when his money is in plain view.
Bottom Right: Sidney Crosby has the Stanley Cup and Ovechkin doesn't. Crosby will celebrate this by drinking Ovie's tears out of the cup with his awesome crazy straw. Not pictured, Ovie's escape segway. 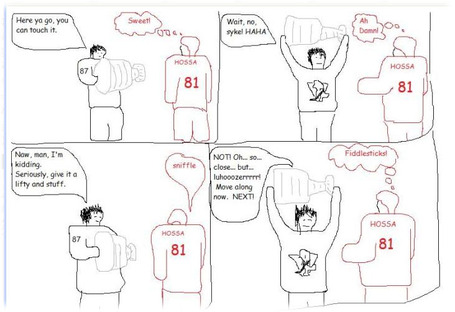 Iomor27 takes a jab at former Pen Marian Hossa as Sid shows off the Cup. Notice Hossa's sniffles in the third box while Crosby continues to get some sort of sick pleasure out of tempting him to touch it. I can't verify it, but this is likely a true-to-life rendition of the postgame ceremonies. Nicely done Iomor. 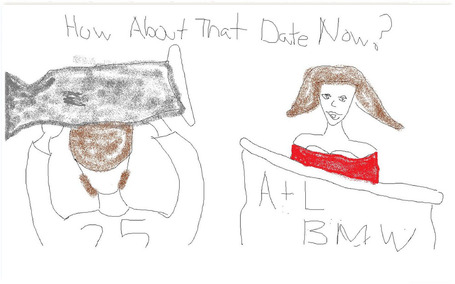 Candyman44 captures the reality of Max Talbot's Stanley Cup celebration. Speaking French didn't exactly pick up the chick at the desk in the A&L BMW commercial, will the Stanley Cup? Only Max knows for sure. Nice touch Candyman44.

That does it for our entries. Be sure to vote for your favorite now. Voting ends tomorrow at noon, so don't wait on it!