What does Sidney Crosby have in common with the Kool-Aid man?

Share All sharing options for: What does Sidney Crosby have in common with the Kool-Aid man? 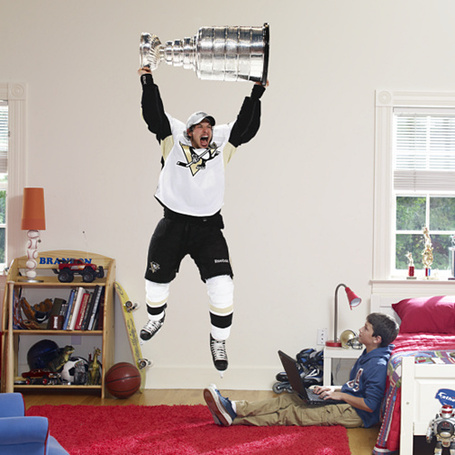 You almost have to wonder what Sidney Crosby could possibly have in common with that overly obnoxious Kool-Aid guy who busts through walls and scares the living crap out of kids everywhere.  But then, when you see the latest Crosby wall picture added to fathead, it all makes sense.  Kinda.

Picture a dimly lit room, maybe the sun is just starting to go down.  It's been a long day of school/work.  You just want to come home, relax and take your mind off of the nagging teacher/boss and unwind a bit.  As you work your way into the man cave/room, you're caught off guard by the silhouetted outline of some monster wielding a small body over his head.  A quick flick of the light reveals that it's just Sid, raising the Cup, not a corpse.  He's matted up on the wall, staring back in all his glory with a look on his face as if he's going to either scream at you or bite your head off.

Yet at the same time it's kinda funny.  Imagine getting this as a gift.  How do you react?  Where do you put it?

As popular as Sid is, I have to agree with WrapAroundCurl (she e-mailed me the link) - Talbot shushing the crowd would be the ultimate fathead.  I'd put that one up on the cubicle, maybe it would decorate the wall in the meeting room.  It makes a pretty big statement.

If you have suggestions, I'd love to hear em.  And feel free to photoshop your own fathead.