Share All sharing options for: Picking on the new guy: Eric Tangradi 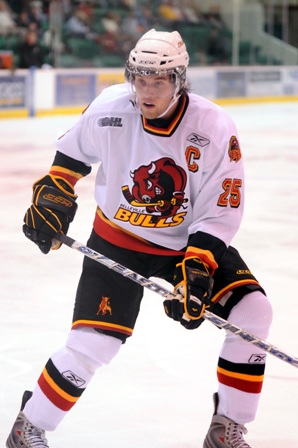 It's pretty common practice in hockey locker rooms - hell, any sport's locker room - to endlessly make fun of the new guy.  I remember back when Jagr first signed on with the Pens the team put vaseline on his windshield.  Upon entering the car, Jagr tossed on the wipers and ultimately went through hell trying to get it cleaned off.  Fun stuff.  Even after Sid was technically done being the new guy, Jarkko Ruutu put baby powder in Crosby's locker after all those crybaby allegations came flying his way.  Guys crack jokes and try to keep it loose in the locker room.  That's the way it goes.

A little hazing never hurt anyone, and in a way we have a prime candidate in Eric Tangradi.  Young guy.  New team.  Nerves are probably firing off in all directions as he takes in this new city and his new teammates.

So when I heard an interview with ET on 1250 last week I kinda laughed at his obvious nervousness as it was displayed over the airwaves.  And now, thanks to the wonders of the Internet, you can take it all in as well.

A rhetorical "ya know" is probably one of the more common phrases uttered by any athlete in any sport.  We don't know anything - yet - but we hope the player being interviewed will tell us so we do know, ya know?  (See what I did there?)  It's filler; just like an "um" or "uh" that so many announcers use while trying to collect thoughts.

But sometimes guys just overdo it.

If work/school allows, hit up this link on ESPN 1250 and listen to the first three minutes or so of the interview with Eric Tangradi.  Can you count how many "you knows" Tangradi uses?  I'll be honest, I kinda lost count after eight.

Interview skills are obviously something a player works on as they spend more time around it and Tangradi will definitely have many more opportunities to do just that..  This is just a friendly ribbing from his new fans here at Pensburgh.