Share All sharing options for: Truculent in Toronto....Pens fall 3-2 to Maple Leafs

Again welcome to the preseason recap, designed with a little commentary and a little re-telling of what happened, in case you couldn't get to see the action..

--With the three normal leaders that wear letters not in the lineup, Mark Eaton, Ruslan Fedotenko and Jordan Staal are all serving as alternate captains tonight, if you care about such things.

--Early on a good shift by Mike Rupp, Nick Johnson and Ryan Bayda and some real good work by Jay McKee and Alex Goligoski to keep the puck inside the blueline. The puck eventually finds Bayda out front and with Rupp attracting a lot of attention Bayda lifts one over Vesa Toskala for the game's first goal.

--Robert Bortuzzo with a little bobble on the PP in his own end kills sometime and then a forward (I believe Dustin Jeffrey or Nick Johnson) ices the puck...On the powerplay. Ouch.

--Physical game as to be expected; Jordan Staal and Fedotenko get rocked in the open ice with clean hits, Matt Cooke draws some revenge with a nice hit of his own.

--Bayda heads to the bench on Pittsburgh's first penalty on a trip. Apparently Bayda is very strong with his stick, as just by putting it behind the Leaf's skate caused him to jump in the air about a foot and a half. It was a trip, but a very well sold one

--The speedy and diminutive Chris Conner gets sprung by Mike Rupp of all people for a breakaway shortly after the penalty gets killed. Conner outraces the Leafs defense, flashes to the backhand and slips it 5 hole on Toskala. 2-0 Pens.

--As a wise man predicted, a fight breaks out between Paul Bissonnette and Jay Rosehill. Ok, so the two are no strangers to each other. Again, Biz Nasty gives him the business, connecting with a bunch of rights and a flurry of rag doll lefts (while keeping Rosehill's own jersey over his face). Blindly Rosehill throws a few and tackles Bisonnette.

--Of current: shots are 9-1 Pens, the scoreboard is 2-0 Pens and the fightcard is 1-0 Pittsburgh. Sidney who? And that Evgeni guy? Pssh.

--Shots end up 9-5 by the end of the period, not much eventful but Brent Johnson was there when he had to be.

After the jump, the next two periods..

--Yesterday The Pensblog mentioned how Pierre McGuire always referred to the Pens forward as "Billy Guerin". Well I noticed another, the head coach is named "Danny Bylsma". If he starts calling him "Jordy" Staal, or "Marcy" Fleury, we've gone too far. As if it hasn't gotten there already.

--Tim Wallace knocked the crap out of Jamal Mayers, injuring the Toronto player. It was a big hit but it wasn't late nor did Wallace leave his feat before connecting, but Mayers didn't see it coming. The way Mayers fell back dazed after impact looked scary but after a while he was able to skate to the bench under his own power.

--Toronto's first goal on a lazy play by the Pens; Bortuzzo chipped the puck from back around to Matt Cooke who lunged and the puck but couldn't get it by TML defenseman Mike Komisarek. The Leafs work it around and some guy named Bozo (actually Tyler Bozak) passes it to someone who might be Jordan's Swedish cousin (Viktor Stahlberg) for a goal. 2-1 Pens.

--Brent Johnson was real slow to get up, as Bozak did run into him and knock him back as he was trying to move to his left. Johnson was limited by a hip injury in the recent past, even though he said he is healthy one has to wonder if he aggravated something. "Johnny" would stay in the game after a prolonged stoppage.

--A lot of people told me I'd be impressed with Mike Rupp after I struck a very sour initial tone from news of his signing. I might be starting to turn their way. The big guy took a great shift, he's a good skater for his size (better than I gave him credit for) and he wasn't playing the toughest competition but was working the puck all over the offensive zone.

--On that powerplay, your opening players: Alex Goligoski and Ruslan Fedotenko on the point, Jordan Staal, Matt Cooke and Tyler Kennedy up front. Even for pre-season that's tough.

--Mike Komisarek checks Cooke from behind and Staal got in Komisarek's face. Bad idea. Komisarek knocks Staal down, then physically picks him up and punches him a few more times for good measure before Staal can tackle him. Good to see Staal try to standup for a teammate but ouch.

--And somehow in that Cooke gets 2 minutes for unsportsmanlike conduct in addition to the two fighting majors. Chalk that up to Cooke's reputation. Komisarek did legit drill him from behind and Staal/Cooke were kind of in a pile when Komisarek was beating Staal up. Not sure what that was all about.

--Nick Johnson does do a good job to get in the way of shooting/passing lanes and makes a difference there doing things that a lot of forwards don't/can't do.

--John Curry (who played all game last night) is in net for the beginning of the period. Johnson was moving slow after he gave up the goal, one has to believe he isn't feeling 100%, the only question now is: how bad is it?

--Chris Conner can absolutely burn it up. I remember seeing him play some with Dallas in NHL action but I do not remember just how fast he is.

--Francois Beauchemin levels Tim Wallace on a pass from Jay McKee that hung Wallace out to dry. Biz Nasty is on the case at once and Beauchemin accepts the fight. It's uneventful, as the strong Beauchemin did well to clamp down on Bissonnette's arms and not give him much to be able and do.

--Mike Rupp got in Stahlberg's face, challenged him to go but no deal. Guess big Mike figured if Jordan got beaten up by a Toronto tough guy his near-namesake ought to suffer the same fate.

--Mark Eaton two uncharacteristic penalties in the third, Tomas Kaberle with a big shot, Curry was up for that and he also made a stop on Bozo, err Bozak on the rebound attempt. Curry looking sharp.

--Leafs 2009 first rounder Nazem Kadri one-timed a great shot but it rang squarely off the post.

--In the dying seconds Wyatt Smith did well to win two faceoffs against Kadri. But the Pens kept icing the puck and Smith lost a third one to Mikhail Grabovski and Kadri ends up burying one with 1:05 left in the game.

--Leafs put shots off the left post and the right post in succession. When asked for comment John Curry said "hey, they pay may to cover the net, and not a single inch more" (not really).

--With about 6 seconds left the Pens got a draw in the offensive zone and Bylsma drew up a play, which worked almost to perfection. Staal wins the draw back to Kennedy who quickly feeds Nick Johnson. Johnson one-times it into the net. Just one problem: Johnson's stick breaks and the puck doesn't make it.

Round 1
--Kadri stickhandles quickly about 50 times and goes forehand for the goal. Kid's got some sick moves.
--Staal tries to make a move and go backhand, but Toskala gets his let out.

Round 2
--Bozo comes down, tries to do something but Curry's not having it.
--Chris Conner comes down accelerating late but the shot is no good.

Round 3
--Lee Stempniak trickles a shot five hole through Curry on the walk-off shot. Leafs win 2-0.

THE GOOD
--Alex Goligoski was awesome tonight. Last night I gushed over Kris Letang, tonight I was nearly as impressed by the way Goligoski was playing. In a word, Goligoski looked comfortable, leading all players with 30:15 of ice-time.
--The competition for the 13th forward: Chris Conner had a great night with the goal and was showcasing his speed. Tim Wallace had big hits all over the place. Paul Bissonnette challenged everyone but the guy selling cotton candy to fight. Nick Johnson played a good positional play and was good at both ends of the ice.
--The TSN broadcast never said anything but Ben Lovejoy only had one shift for 31 seconds, he must have gotten injured somehow. Through injury comes opportunity and the other five defensemen; notably Nate Guenin got to play 27:04 and Robert Bortuzzo got 21:02. Neither stood out for wrong reasons.
--Guenin played 6:18 of short-handed time, far more than any of his teammates, if the coaches wanted to see what he had perhaps there could be nothing better for him than the fact Toronto didn't score a goal with the man advantage.

THE BAD
--A preseason game with two injuries is not good. Even if the injuries were to the backup goalie and a guy fighting for a roster spot in Lovejoy, you never like to see guys not be able to finish. Also Jamal Mayers of the Leafs didn't return after Tim Wallace leveled him, hopefully he'll be OK.
--Mark Eaton was on the ice for both goals against and took two penalties. Not a great tuneup for one of the Penguins' most reliable players, but I doubt it'll matter much in the big scheme of things.
--To these eyes (which don't belong to a pro scout) Wyatt Smith and Dustin Jeffrey were two players that didn't do much to distinguish themselves. I highlighted some forwards in that good that I thought played really well, but Smith and Jeffrey had low-key games, to me anyways. Low key isn't always bad, but when you're trying to win an NHL roster spot, it can't be good.
--Ryan Bayda certainly wasn't low-key with a goal and a penalty taken, but I can't remember noticing him that much in the latter half of the game. He only got 12:31 of ice-time, he might not have played much but he didn't stand out after taking the penalty, which can't be good for his hopes either.

THE INTERESTING
--Even though Ryan Bayda's played in 179 NHL games ever since the 2002-03 season, NHL.com still doesn't know who he is. Now we have to cut them some slack with so many players bouncing all over the place and just the sheer number of different players to appear in an NHL pre-season game, but even though Bayda is relatively experienced, he didn't make the NHL.com statsheet for Pittsburgh tonight 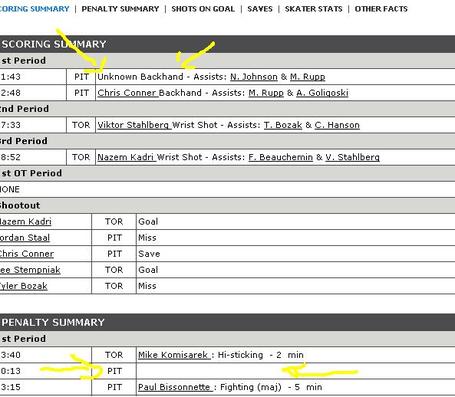 For the second night in a row the Penguins blow a third period lead in Canada. But, considering the circumstances, it's certainly nothing to fret over. Some pieces are looking good, now it's time to make some cuts and join the two rosters together as we trek towards opening night.