Have you noticed that for the past two years of the Winter Classic, one participant in each of those seasons has gone on to the Stanley Cup Finals?  The Pens did it in 2008.  The Red Wings did it in 2009.

As we sit back and watch today's game between the Flyers and Bruins, you can't help but consider that trend and hope that maybe, just maybe it won't happen again this year.  However, I guess there's a catch of sorts.  The Pens lost in 2008.  The Wings lost in 2009.

If you're like me and you plan on taking in today's game, then feel free to hit up either of the two SBN sites hosting open threads.  I'm sure both sites will have a few readers heading out to the game at Fenway, so we may even see a few pictures and videos (perhaps some inside stories too) following the game.  I know Travis from Broad Street Hockey has a great story a pic from the press box up from yesterday.

I hear the puck drops somewhere around 1:30ish.  Might as well tune in earlier though to take it all the hype and vignettes.

Click either pic to take you to the team site: 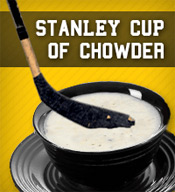 Hope you all had a good New Year's celebration.  I plan on drinking plenty of water and orange juice today to bring myself back around.  If only I had an IV drip I wouldn't have to sit here like a sucker using my own energy.  Sigh.