In this new age of statistics, let's take a look at which Penguins are drawing penalties and who is taking them.  Thanks to behind the net and it's for you to see after the jump.. 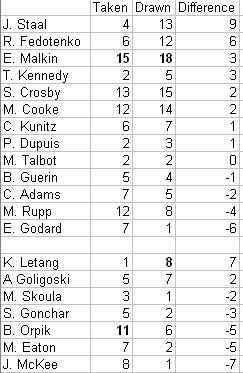 Exercises like this are why coaches and broadcasters a like tend to praise guys like Jordan Staal and Ruslan Fedotenko.  They're smart players that don't take many penalties but they do a good job controlling the puck and forcing the opposition to hold/hook/trip them.

Anyone else surprised to see Matt Cooke not only have a positive net impact on penalties but also that he's drawn almost as many as Evgeni Malkin and Sidney Crosby?

Malkin and Crosby, for their part, both have about identical numbers here.  Malkin is a very aggressive defensive player when it comes to going after takeaways, which leaves him vulernable to hooking, high-sticking or taking an opposing puck carrier down.  It's almost an occupational hazard for a guy amongst the league leaders in takeaways.  Crosby showed some petulance and took a bunch of frustration penalties (like retaliation slashes) early in the season but that has dropped off lately.

Defensively it's not surprising that the puck carrying guys (Kris Letang and Alex Goligoki) lead the way in penalties drawn.  On the flip side the defensive minded defensemen in Jay McKee, Mark Eaton and Brooks Orpik have naturally had to take trips to the box to do their defensive dirty work.