Share All sharing options for: Marc-Andre Fleury, Sidney Crosby lead the Pens over the Calgary Flames 3-1

The Penguins not only played in the west tonight, they played a "Western Conference" style game against a team that came into the night as a division leader.  You know the type: a tight-checking, earn every inch of real estate tough 3-1 game, that featured some great goaltending.

And there was no greater performance in the game than that of Marc-Andre Fleury.  MAF got dinged up early last time out, but rebounded once again with a 36 save on 37 shot effort.  He was sharp early and up for about everything the Calgary Flames were throwing his way.

Sidney Crosby got the scoring started less than four minutes into the game, driving around Jay Bouwmeester (like he did so many times when "JayBo" was a Florida Panther) and depositing the puck by Miikka Kiprusoff.  Calgary would tie things up at 1 when Mark Giordano finished a mad scramble on a Flames power play and beat Fleury.  The Pens would answer right back a minute later with a rare PP goal of their own when Bill Guerin deflected a Sergei Gonchar shot for the eventual game winner.  Jordan Staal would dig a puck out from behind the net and feed Tyler Kennedy for the game's final goal at 18:20 of the 3rd period to salt the win away.

The Pens played an almost perfect road game against an unfimiliar opponent.  They took an early lead, got some great goaltending, were pretty good on the PK (4 for 5) and didn't fall behind on the scoreboard.  Classic stuff for a team looking to get back to their winning ways.

When you're far from home, sometimes it's best to just get the 2 points and get out without suffering any injuries or generating any controversies.  The Pens had replay-gate and Gonchar/Clutterbuck in the two of the past three games, so it's almost a relief to get the old-fashioned win and move it on.

Finally, after the jump a pic that must be seen.  Mr. Crosby receives what appears to be a very serious inquiry.  And also the new fangled "comment of the night". 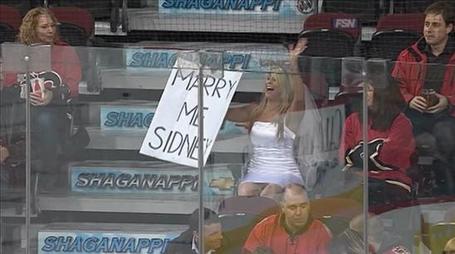 "I bet her Hooking is a bit different than he’d expect." -- tehchico