In a pinch, Pens turn to Pechurski

Share All sharing options for: In a pinch, Pens turn to Pechurski 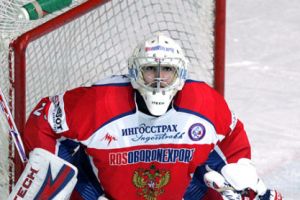 As you probably know by now, the Pittsburgh Penguins suddenly have some issues in the crease.  Marc-Andre Fleury fractured a finger on his glove hand during the last game against Edmonton.  Even though he solidiered through the game, he's day-to-day.  Brent Johnson is on the IR with what's believed to be a minor groin issue.  Johnson was eligible to play as soon as today, but apparantely he's not healthy and/or in good enough condition to even serve as the back up tonight.

The unavailability of the top two goalies leaves the Penguins, 2500 miles from home, in a pinch.  They've had John Curry on the whole western swing, and he's dressed as the backup in the past couple games.  Curry has three games of NHL experience, all from last season during injury problems opened up a chance.

Wilkes-Barre has Brad Thiessen -- no stranger since he was with Pittsburgh for the conclusion of the Stanley Cup run -- but he just played last night on the East Coast and flying him cross-continent on short notice just wasn't an option.

So they turn to Alexander Pechurski.  Pechurski is still fresh to North America, joining Vancouver of the WHL under a month ago.  His Russian team (ironically the same team Evgeni Malkin played for) wouldn't grant him a release, even though they played him sparingly.

Pechurski has played well in his early games: he's 4-1-1 with two shutouts, a stingy1.84 GAA and a strong .936 save percentage in the WHL.  Granted, that's against junior aged players, hardly the competition level of NHL leading scorer Henrik Sedin and the rest of a NHL team.  The Pens drafted Pechurski in the 5th round of the 2008 draft.  He's said to be an athletic goalie, but it was unknown if he'd ever have a desire to play in America.  Given his actions, obviously he does.

Pechurski isn't signed to a one of the organization's 50 contracts (yet) so they give him the 1 day temporary "tryout" contract as a way to get him on the team.  I believe these contracts do not pay anything, though he'll likely get the per diem and some nominal money for travel expenses.

There's no doubt the location is the main reason in the Pens tab Pechurski for a day -- they're in Vancouver, he's in  nearby Washington state -- but what a rush it must before for Pechurski to go from being in Russia one month ago preparing for the WJC to being on an NHL bench.  Hopefully it's a taste of things to come for him soon.  Then again, let's hope just as much that Curry makes it through the game we don't have to find out too much more about Pechurski.