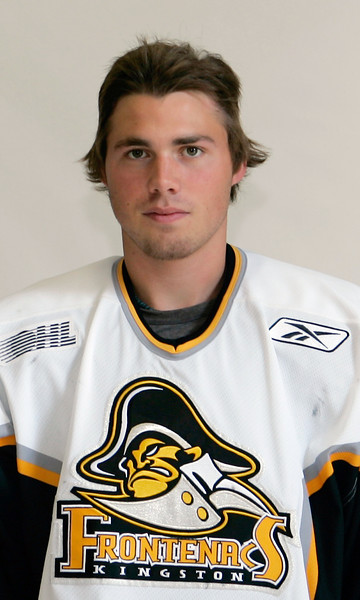 I was fortunate enough to catch up with Nathan Moon recently.  Moon was the 4th round pick of the Pittsburgh Penguins back in 2008 (120th overall), but he has a little more fanfare than your usual 4th round pick. To acquire veterans (like Marian Hossa and Hal Gill) the Penguins dealt their picks in the first three rounds in '08, so Moon was the first player selected by Pittsburgh that draft.

After the jump, see how Moon's Kingston Frontenacs of the OHL are doing, how he describes his game and his thoughts about the ugly elbowing incident from the Quebec Major Junior Hockey league.

First of all, how's it going in Kingston?  You guys have had a couple of tough seasons the past few years but it looks like you're pretty competitive now.

This is my fourth year here; we've missed playoffs the last two seasons but now we're competing.  The goal is to make it to the playoffs; we're in a race for our division so hopefully we can pull together with a nice stretch run here and turn things around.

This is going on the third season in a row for you've been leading the Frontenacs in scoring, how would you credit your success at producing at the junior level and do you see it transitioning over to the pro game?

Well I just try to go out and work hard.  I have a knack around the net when it comes to scoring, the puck is on and off my stick quickly and I'm fortunate to put it in the net more times than I miss.  The difference to the professional game is it's obviously a lot faster and a really a different game than juniors.  I'm relied on here to do a lot, I don't have to "the guy" at the next level but it is important to keep working hard and contributing.

You touched on this a little, but for the Pittsburgh fans that haven't gotten to see you play yet, how would you describe your game?

Again I'd say I'm just a hard working player with a knack for net, good in tight to the goal.  I would compare myself to a player like [Boston's Marc] Savard, because I try to pass the puck to setup my teammates a lot and I like to use my stick-handling to attack the zone.  I've become good at faceoffs; I get lots of time on the power play here, I play on the penalty kill.  I'm counted on here to do a lot and I just like to help the team as much as I can.

The big story recently from juniors is Patrice Cormier's elbowing incident: do you know Patrice personally or have you ever gotten to play with/against him throughout the years?  What were your thoughts about being a player in Canadian juniors and seeing that play?

No, I don't really know Cormier personally; but I'm familiar with him and I've watched him at juniors [WJC U-20] the past two years on TV.  Cormier is hard working guy and plays with an edge, but what he did was uncalled for.  [It was] kind of a cheap shot to hit a guy like he did, and a scary situation there.  I don't know what the "Q" is going to do in terms of a suspension, but I think if you look at the [Mike] Liambas hit from our league earlier in the season, maybe Cormier gets [treated] something similar.

Who were some of your favorite players you liked to watch and emulate when you were younger?

[Sidney] Crosby, [Evgeni] Malkin; I liked watching a lot of the younger guys coming up just before me.

Are you still playing exclusively as a center these days?

Yeah, except for a maybe a key draw on the left side of the rink, I'm mostly playing center.

As you know, in Pittsburgh there's Crosby, Malkin and Jordan Staal on the depth chart; that doesn't leave much room for centers at the NHL level.  Do you think you could transfer your game over to the wing and still be effective?

Yeah, for sure.  Like I said, I am playing wing a little now and it's usually in a lot of important situations...But I think my speed, my ability, my playmaking, it doesn't really matter whether I'm on the left, right or in the middle.  I don't mind shifting to the wing one-day if I had to, and I don't think it'd be that big of a deal.

I read an interview online from last season where you mentioned wanting to get a little stronger and be better defensively to improve your game.  How do you feel you've done to make those strides to improve your all around game?

That's exactly right, if I make it to the big time it's got to be because I can make defensive plays.  Everyone in the pros has a lot of skill, but you have to be reliable when it comes to making plays in your on zone.  I'm working on aspects like foot-speed, and think I've improved and continue to do so.  [In terms of plus/minus stat] I've gone from a minus in the past couple of seasons to a plus now.  I've been on a 12-month long gym program to keep increasing muscle and get stronger, it's something to keep working on, always.

Do you see much of Tom Fitzgerald or any other hockey operations people from Pittsburgh?  How closely do they let you know they're keeping tabs on you?

Yeah, Tommy has been sending me texts and giving me calls, they've been a first-rate organization as far as contact with me and helping me in my development.  Obviously you see they won the Stanley Cup last season, so they're just as strong all-around in terms of working with young players like me.  It was an honor when I found out I had been drafted by them two years ago.

What's the plan now, have you heard any word about possibly joining the Wilkes-Barre/Scranton Penguins in the AHL after your season is over?

Right now I'm focused on working with my junior club, we're in a battle for first place in our division.  It's very important for us to make it to the playoffs and try to take the next step of getting past the first round, would be a big step for our organization since we haven't been to the playoffs recently.  Hopefully something with Pittsburgh could work down the line, but for right now I'm concentrating here on doing my best and we'll see what happens depending on how they're doing and how far we can go here.

Thanks for your time Nathan; I've appreciated talking with you.  Good luck down the road.