A peek at the standings

Share All sharing options for: A peek at the standings

The Penguins continue to trudge through the regular season.  With three weeks and nine games until the extended break for Olympic action, let's turn catch a quick glance of the standings sheet and see how Pittsburgh is positioned as the push for the playoffs picks up. 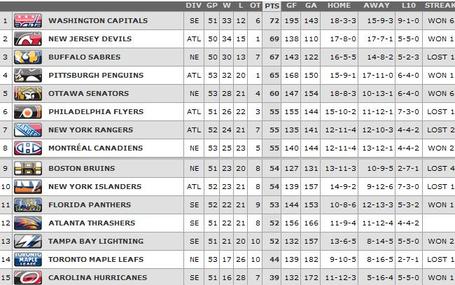 --Ottawa might be having the best season in the NHL that no one is really talking about.  The Sens don't get many mentions league wide, but as you can see they're riding a six game winning streak and if the playoffs started today (they don't), we'd see a Pittsburgh/Ottawa first round matchup for the third time in four seasons.  Ottawa's somewhat unexpected success is surprising, given the multitude of injuries to important players and that their Goals For/Goals Allowed differential is not positive.

--It's probably official: Philadelphia has stablized under Peter Laviolette.  With so many games to go from when they had their struggles, not many expected them to remain in the bottom half for very long.

--Again, the playoffs don't start today but four Atlantic Division teams are in the top 8 and the suprisingly upstart New York Islanders are only a point out of the mix.  Tough division, so anytime the Pens can get points -- and prevent others from picking up some (like they did by beating Philly with a late regulation goal yesterday) -- it's a big deal.

--I borrowed the term peloton from cycling for the big pack of riders that hang together and constantly shuffle around positionally.  Due to the 3 point games, a peloton of NHL teams usually forms in the standings, with re-shuffling on a daily basis expected.  The breakaway teams, of course, are the top 4 teams right now.  Ottawa, by virtue of the six straight wins, also has a little distance.

--Philadelphia (t-6th) to Tampa Bay (13th) is separated by three points, with six teams in the middle.  The teams have played anywhere from 51-53 games, so "games in hand" could come into play as a major factor.  However, as obvious as it seems, a game in hand doesn't mean much if a team loses the game in regulation.

--On the sadder end, Toronto and Carolina have lost touch with the peloton and are on (or past) being on life support.  But for a season that's 60+% completed, 13 teams have realistic playoff hopes.  We don't have to look far to remember the runs that the Pens are Carolina went on from February  That's incredible.

--Yup, the Tampa Bay Lightning, who've been outscored by 25 goals in 51 games are about a four game winning streak from being in the top 8.

--While we're thinking crazy: there's a possibility that all of the "Original Six" franchises in the East could miss the playoffs (which would have to be a first, right?).  Three of the franchises are in the mix, but it's just that: a mix.  Could you envision teams like Florida and Atlanta in the second season while there's no hockey in spring in places like Montreal, New York and Boston?  Probably won't happen....But it could.

--I think Pittsburgh is positioned well.  They're 10 points above the rabid pack of teams in the desperate spin-cycle in the standings, which is a nice place to be.  Then again, the Pens are also between 4-10 points behind New Jersey (since the Devils have three games in hand right now), it's going to be a difficult challenge to win the division and stay out of the 4/5 first round matchup.

Ultimately, if you're a betting person, the Pens probably stroll into postseason in the 4th seed and play whoever the top team from the peloton is -- Ottawa now, but it could easily be Philly, NY Rangers, Montreal or any other team really.