Andy Bathgate: 'My name is a good thing, a blessing really'

Share All sharing options for: Andy Bathgate: 'My name is a good thing, a blessing really' 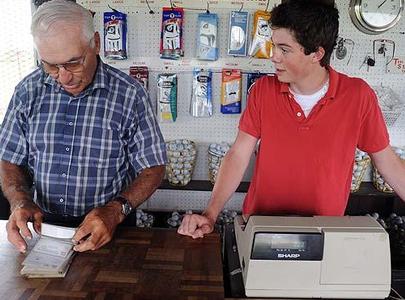 (Image from The Star)

Andy Bathgate is a hall of famer, who made his mark mostly with the New York Rangers and spent the last two seasons of his NHL career in Pittsburgh, with the expansion Penguins.  Bathgate holds a place in Penguin trivia folklore, he scored the first goal in franchise history.  In addition he was ranked the 58th best player in history by The Hockey News in 1998 and Bathgate's #9 jersey is retired with the New York Rangers.

There's another Andy Bathgate on the horizion.  The grandson shares the hockey legend's name and is a 19 year old prospect, playing with the Belleville Bulls of the Ontario Hockey League.  The younger Bathgate was drafted in the 5th round of this 2009 by the Penguins.

After the jump, Pensburgh catches up with Bathgate the younger.

Pensburgh:  First of all, my apologies since this is surely a question you must get all the time - do you think you get any extra attention (good or bad) for having such a famous name in the hockey world?

Andy Bathgate:  Oh yeah, people know about it.  I probably took a little razzing in the past, but not as much these days.  At first maybe I thought it was a negative to be compared to my grandfather but now I realize my name is a good thing; a blessing really.  I'm obviously proud of my grandfather, he was my coach for about the first 10 years I played and between him and my dad they taught me everything I needed to know to get to this point.

What did the elder Andy Bathgate think when you were drafted by an organization where he spent a couple years of his Hall of Fame career?

He was thrilled.  He's told me so much about how great the city of Pittsburgh is and how great the organization has always treated him.  He said it'll be hard work to get up there and that hard work starts now.

It's been a tough season for the Belleville Bulls. What's the mood like in the room?

We had a bunch of good runs the past couple of seasons and some of our older guys moved on to the pros.  It's a totally different team now - even compared to the beginning of the season I think we only have like six or seven guys left who started the year here, with all the trades that have been made.  We have a ton of really good, young talent and I think we'll be well positioned for next season.  Of course, we still have about 22 games left to go and we want to finish strong and on a positive note, so it's gonna be fun the rest of the way.

Speaking of some of those old teammates, one of them was Eric Tangradi, who's now with the Pittsburgh organization too.  Tell me something about him.

[Laughing] Yeah Tanger was awesome, we were teammates for about two years, I didn't get to play with him too much due to injuries, but we were definitely close.  He's a great guy and helped me through everything in the transition up to the OHL.

So you think your career path probably means you'll stay in the OHL for another season?

Yeah, I totally am expecting to be back next season. [laughing] Unless somehow I pull a rabbit out of my hat and somehow stick in the NHL - which I totally do not expect at all!

What aspects of your game do you think you need to improve on before you can make it as a pro?

I think the main thing is going to be strength.  I probably weigh about 175 pounds, soaking wet, on a good day.  That's not going to cut it at the NHL level, I know that.  So I'm in the gym all the time working on my strength and conditioning, trying to fill out and get bigger and stronger.

What position are you playing these days?  You're listed as a center, which is going to make that NHL dream a little tougher given some of the guys on the roster.  Would it be tough for you to transition over to the wing, if you had to?

This season things have been crazy, I've been all over the map.  I think I've played every position except goalie so far this season. [Laughing]  I'm getting to be an older guy on the team and they rely on me a lot, so it's not a big deal.  Obviously for the chance in the NHL I'd play anywhere on the ice.  It doesn't matter where, I think I'm pretty flexible and I can play about anywhere.

For the Pittsburgh fans that haven't gotten to see you play yet, who's an NHL player you might describe your game to relate too?

Actually, I would say James Neal, the guy in Dallas.  If you look at him, the thing is he plays so well in all three zones.  He kind of flies under the radar a little bit, but it makes a guy a bigger threat when they are good all over the ice, and that's the kind of player I try to be.

Who were some of your favorite players you liked to watch when you were younger?

Mario Lemieux, without a doubt.  The way he saw the ice, his hockey IQ, I really think it's second to none, at least for the guys I've watched.  He was so good about knowing how things were going to unfold and obviously had all kinds of skill to move the puck everywhere.  Which made it an even bigger honor to be drafted by the Penguins.

Ok, last question. What's the best chirp you've either heard or given out lately, anything come to mind?

[Laughing] Oh I got some good ones.  Here's one I'll share with you that you can use: we're in a league where it's mostly teenagers and some guys are still going through puberty or whatever.  [Laughing]  This isn't the meanest thing I've ever heard, but you know how some insults just cut right into your gut and it just hurts?  So my buddy Mackie is playing up in Oshawa and a guy skates right up to him and says: "Hey Mackie; you're supposed to eat the pizza, not roll around in it!"  You know, calling him a pizza face because of his acne.  [Laughing] Mackie just looked like he got blindsided, his face dropped and there was no comeback for it, so I guess that was pretty good.

Thanks Andy, and best of luck down the stretch!