Since starting up this blog three seasons ago, I've been offered free items in exchange for reviews.  I've easily turned down more than I've accepted for a variety of reasons, and more often than not whatever I have accepted I've offered up as a contest or giveaway on this site.

First off, when someone says they will send me something for free in exchange for a good (and "we mean good") review, I immediately shut off.  What good is a review if it can't be honest from the perspective of someone reviewing it?  Plus, some items will really not make the grade when it comes to forced positive reviews and come off as more transparent than the tears of Philly fans.

Even when offered over a dozen or so items to give away to you guys, some of the weirder offers and requests for positive reviews that I've turned down over the years listed after the jump.

So when the NHL approached me earlier this week and offered the remainder of the season of NHL GameCenter for free in exchange for a review, I figured it would be just another one of those free products or items I have to turn down based on my own set of standards for this site.  However, without even having to ask, I was told to give an honest review, full of the good and the bad.  Or all the good and no bad.  Or all the bad and no good.  Basically, in exchange for a free half season subscription to GameCenter Live, I could be as critical as I wanted to be and still have it for the remainder of the season.  That's a win-win in my book.

For those of you who already use it, I'd love to hear what you have to say.  For others who may have been on the fence, I hope my review is honest enough to steer you in either direction. 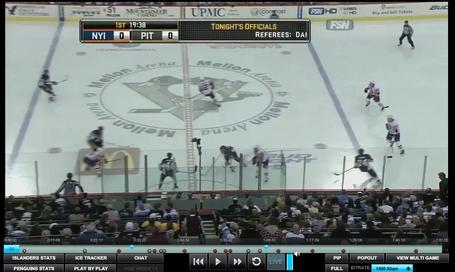 There are also some features I could really care less about:

Heading into the program my main concern was being able to watch the live game without any sort of blip in the feed.  Much to my satisfaction, GameCenter Live takes care of that without any significant lag.  Sure, there were a few instances where it buffers the feed, but when it does kick back in again you pick up where it left off.  So really you don't miss a second of the game, even if you have to wait a second or two for it to play catch up.

Some of the added widgets and features just aren't for me.  I'm not a bells and whistles kinda guy, despite being a tech nerd of sorts.  I was intent on keeping it simple.  Again, two games is my max.  Even if I only have one game loaded on the computer and another on my TV, two is about as far as I'd go for multi-game view.

I tried out GCL last season during a trial run but didn't think I'd want to invest in it based on the notion that it wouldn't stream fast enough or that I'd get annoyed by the buffering of the feed.  Having watched two games live and a few clips from archived games, I have to say it didn't happen nearly as much as I thought it would (or as I remember it happening last season), nor did it even have significant periods in which the feed slowed down.

For someone who likes the idea of keeping everything mobile and on the go so as to coincide with my ADD, I like knowing that I can load up the game on my computer wherever there is an Internet connection available without having to be locked to my couch to take it all in.

Now that I've thrown out my two cents (more like a $1.50 at this point), do you guys have any feedback, whether good or bad, on GameCenter Live?  And for those who haven't tried it but would like to give the demo a run, you can do so over at the GameCenter Live page.