The heavyweight in waiting: Wade Brookbank

Share All sharing options for: The heavyweight in waiting: Wade Brookbank 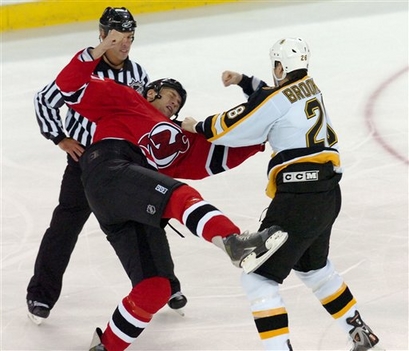 Eric Godard is down for 4-6 weeks with a groin injury, and given how much fans enjoy discussing the enforcer role, this is a topic worth bringing up.  The Pittsburgh Penguins have options at the minor league level, if they so choose.  No one knows this better than Jonathan Bombulie, the beat writer for the Wilkes-Barre/Scranton Baby Pens.  Here's his thoughts on the best enforcer option on the farm.

If Pittsburgh wants to call someone up as a direct replacement for Godard, heavyweight for heavyweight, it would definitely be [Wade] Brookbank. He has experience fighting the toughest guys in the NHL, he’s a smart player who won’t get abused defensively or sucked into bad penalties, and unlike Jesse Boulerice, he’s already under NHL contract. Zach Sill isn’t a heavyweight by any stretch and he’s still figuring out the AHL game. Aaron Boogaard can’t crack the AHL lineup at this point.

Granted, this is qualified by a big "if".  There's no guarantee the Pens will need or want to make a re-call for a guy only for the purpose of adding muscle and enforcing.  It's no secret they're tight to the salary cap already and literally every dollar (and day) counts, so adding a pure pugilist might not be in the cards.

Godard was only getting about 4 minutes a night of playing time.  Replacing him on the ice is not a problem; they could easily keep guys they already have like Craig Adams or Maxime Talbot in a 4th line role and be a more balanced team.  The issue is having a real tough guy on the bench, and whether or not it's worth it.  Is having Mike Rupp enough if things get chippy in a game or if a Penguins star player is questionably hit?  And would that be worth the precious salary cap space to call-up even on a bottom dollar paycheck?  That's for Ray Shero to decide.

The important thing is the Penguins have depth in toughness down on the farm, if they need to call-up Wade Brookbank to mainly sit on the bench -- and get in a fight or two for the team -- he's just waiting on the call.