It seems like the Pittsburgh Penguins have played the Detroit Red Wings more often than they've played some Eastern Conference teams.  If you start in May 2008, Pittsburgh and Detroit have locked horns 16 times, which is obviously the most of any current East/West rivalry these days.  The teams know each other.  They play at a high level, and they don't ease up.

The Red Wings may have come into the game under the playoff line (thanks mainly to long-term injuries that would dehabilitate any team, and they may have used a new goalie in Jimmy Howard.  But their performance didn't, as they battled Pittsburgh on the road to a draw on the scoreboard before the Pens big guns came through in the gimmick to earn the extra point.

After the jump, the analysis and a chart of how the Pens peppered Howard.

The first goal didn't go through until almost 37 minutes into the contest when Evgeni Malkin feed Alex Goligoski who rocketed a hard tape-to-tape to Sidney Crosby.  El Sid handled it, deked to his backhand and had an empty net to deposit the puck.  With nine minutes left the Red Wings would answer off a point shot from defenseman Brad Stuart that Daniel Cleary deflected past Marc-Andre Fleury.

There'd be no more until the shootout.  Kris Letang would be denied by Howard, Pavel Datsyuk missed on Fleury.  With Sidney Crosby up, he skated in, made a move, and with a lot of patience slowly pulled the puck backhand and straight upstairs.  MAF would stone Jason Williams before Evgeni Malkin skate in slowly and freeze Howard with a slick backhand move. 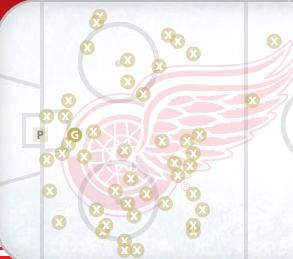 The Pens get a four day break, but wait there's another national broadcast* tomorrow against the Buffalo Sabres (*if you consider Versus a nationally televised game).  The Sabres currently sit in 3rd place in the Eastern Conference and with Vezina contender Ryan Miller -- or God forbid Patrick Lalime -- sets the talble for a classic "letdown" game.  The boys better put this out of conference game in the rearview mirror, even though it surely was a satisfying a deserved win.