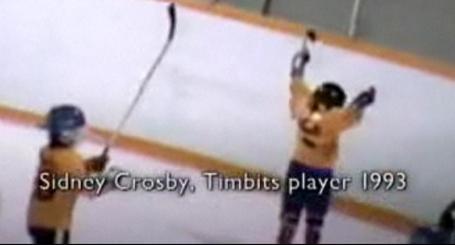 Hopefully this doesn't read off as a testimonial of sorts, because I'm not getting paid jack for saying this (but hey, you can make checks payable to FrankD if you'd like, Mr. Tim Hortons executive-type guy).

I can't help that I'm a sucker for Tim Hortons coffee.  Any time I take a trip north of the border I buy a jug of coffee that often lasts me about two months.  Sure, I'll drink other coffee throughout the day: crummy little Keurig cups, Starbucks or even Dunkin Donuts (not my favorite), but Tim Hortons coffee is the only one that makes me sweat standing still, feel my heartbeat in my eyes (seriously) and wish I could just hook up to an IV and not sleep for three weeks.

In other words, I love it.

So when Derek Zona of Copper N Blue passed along this Sidney Crosby commercial, I had two thoughts go through my mind.  1) Why the hell is he torturing me with this commercial when I have about three good cups of coffee left in the tin on my kitchen counter and 2) I gotta share this with Pens fans.

Unfortunately I can't embed the video (yet), but if you'd like to check out the latest commercial you can do so here.  It shows some clips of Crosby as a kid, scoring a goal with his Timbits team (pic above) and even cutting back to clips from his earlier interviews where he looks like he'll never grow into his head.  I mean that literally in a physical sense - not a figurative/egotistical sort of way.  Every guy goes through that awkward phase at some point.  Some guys never get over it.  Look at Ollie Jokinen.