Pens fans love to talk blue jerseys and the team announced when they're wearing their alternate jerseys.  The fimiliar 2008 Winter Classic jersey (seen above) will be worn Friday.

Commonly considered to be a "jinx", but do the Pens need to go back to their roots for their original color to get that first win in the new building?  Couldn't hurt to try, right?

The new Winter Classic jersey hasn't been officially released, but Icethetic has their take on it, one that the boys at The Pensblog have agreed is probably close to what we'll see for the Heinz Field game.

Personally I wish they went the old "Snoop Dogg" mid-1990s black jersey with the diagonal PITTSBURGH down the front and some yellow trim.

But remember, Washington is wearing some like old school '70s jerseys (below), so it would seem weird if the two eras didn't match up in terms of what they got on 1/1. 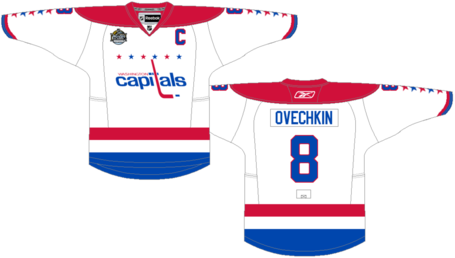 After the jump, the list of when you'll see Pittsburgh in blue this season.

From the team site:

Interesting they'll be in blue twice on the road...Has this happened with the most recent run (post 2008?)  Can't recall that happening.