A three-goal first behind the sticks of Mark Letestu, Sidney Crosby and Evgeni Malkin set the pace for a 5-2 Penguins win over the Senators, the third straight win for Pittsburgh and fourth of Brent Johnson's hot start between the pipes.

The scoring went deep tonight as well, as Pascal Dupuis and Count Kris Letang each tallied their first of the year on a night where even the power play went an impressive 3-for-9.

More on the win after the jump.

Many would say this could very well be the start of a goaltending controversy in Pittsburgh, but for those who had a chance to catch Marc-Andre Fleury's face as he congratulated Brent Johnson on the win, there's no way you can say there is any animosity between the two.  It's been said by many around these parts and it likely needs no repeating, but here is goes anyway: riding the hot glove is paying off.  Tonight he made 32 saves on Ottawa's 34 shots.  That's a hot glove.

How about a little love for that power play that connected for three goals tonight?  It may very well be turning into the deadly weapon many had hoped (and many more have feared) it could be.

Mike Comrie made his way onto the scoring sheet tonight with two assists but still remains scoreless on the season.  Mark Letestu just continues to impress game in and game out as he registered one goal and one helper in the win.  He's now amounted five points over the past three games (2g, 3a).

As many said during the open thread, it was nice to see Sergei Gonchar back in Pittsburgh, but by the end out of the game I don't recall a single fan wishing he was still in the black and gold.  It's not so much a matter of bashing the former point man, but instead a means of confirming that once again Ray Shero knew what had to be done.

Mike Rupp has found the net only once so far this season over the first seven games, but you have to love what he does out there for the Pens.  Tonight he was awarded an assist on Letang's power-play goal in the second and also received five minutes for Rupping later in the third.

It'd be hard to find something bad to say about this game, but it's hard to determine what exactly went on in the third period.  Were the Pens starting to fade or were the Senators putting on tremendous pressure?  Either way, the defense looked to be dismantled at times and Johnson had to come up with some big saves to not risk allowing Ottawa to start any kind of rally.

Comment of the night comes from PensAreYourDaddy (it's a picture that didn't receive nearly as much love as it should): 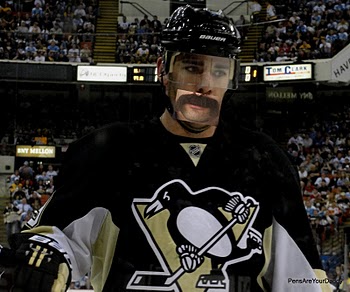