I know I can speak for everyone when I say I'm fired up about the season starting tomorrow. I mean, you've all indicated in your comments alone that the season can't come soon enough. If I didn't share the same sentiment I'd suggest you check yourselves into a psychiatric ward, but since I do as well I suppose I'll just have to show you the way to the padded room.

Last season I was offered a free account for Gamecenter Live after providing an honest, straightforward review. This season that offer was renewed once again but didn't carry any specific requests or demands for reviews, praise, etc.

But I still felt obligated to share something with you guys, if only because I found myself enamored by one little feature for about four hours last night and I'm confident a lot of you would like it as well. And if I can work at a computer nine hours a day and still not pull myself away from it at night, then it has to be good.

After the jump, a special added feature that I'm sure you're all going to love on the latest version of Gamecenter Live. Jump.

I watched Mario Lemieux play last night again for the first time in five years. And I don't mean I watched a few clips here or there. I can do that any day on YouTube. No, I actually watched Mario and the Pens destroy the Minnesota North Stars in Game 6 of the Stanley Cup Finals back on May 25, 1991 in its entirety.

I was able to cut into some of my hockey anxiety last night. The archived games section on Gamecenter lets you watch games from...whenever. To be more exact, it doesn't let you necessarily search for a day, date and time or anything but it does keep some of the classics on file. From someone who often passes by the NHL Network on his TV hoping a classic game is scheduled (and by classic, I don't mean Game 5 of the 2007 Western Conference Finals), this is simply awesome. 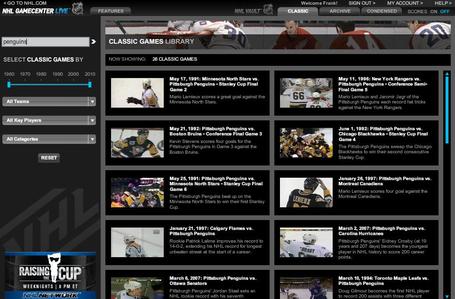 So I watched that Stanley Cup game (third down on the left), then followed it up with December 13, 2006 when Sid picked up one goal and five assists against the Flyers (and Fleury's yellow pads!) and then followed that up with Mario's four goals against the Habs on January 26, 1997. Best part? No commercials.

Again, I wrote this post because I knew you guys would love this feature. But in the essence of good business and a general interest in seeing the product continue to improve, I suppose it couldn't hurt to solicit a few questions along the way. I know if I can improve the product I'd want to see more games available, but I'm pretty sure that's something the NHL is already working on.