Share All sharing options for: Good news, everyone! Penguins 5, Lightning 1

On a night where the Penguins needed a big win, a big win is exactly what they got, including a solid defensive game from Paul Martin and Zbynek Michalek, who finally looked comfortable together. Read more after the jump.

If you only looked at the box score, you'd think that the first period was completely uneventful. Well, for the first six and a half minutes, you'd be right, because there were zero shots in a true display of defenses. Eventually, two power plays for Pittsburgh and one for Tampa provided a small amount of offense, but both teams were kept off the score sheet due to some luck for Tampa and some fine acrobatic saves for Marc-Andre Fleury. Yes, you read that right.

The first half of the second period was a slog of penalty calls with one side getting abbreviated power plays before the other side would buy a penalty of their own, including more brilliance by Fleury.

The Penguins finally broke the ice...ha, ha...just before the halfway mark of the second period when Pascal Dupuis scored on a deflection on a shot by Kris Letang. All of 27 seconds later, Goligoski scored on a wide-open net where Mike Smith appeared to give up before Goligoski even released the shot. Hey, you've gotta convert those shots too, right, Mike Comrie?

The goal scoring forced Tampa to open up and abandon the 1-3-1 that has given them so much success this year. This, of course, played right into the Penguins' hands, although scoring was finished for the period, including a double minor for high sticking that the Penguins could not take advantage of.

Five minutes of the third period went by before Brooks Orpik and Dupuis ended up in the box at the same time and wunderkind Steven Stamkos blew a shot by everyone on the 5-on-3 to cut the lead to 2-1. Immediately after that, after some more great work by Fleury, Matt Cooke ended up in the box to give Tampa another 5-on-3 for 75 seconds, but the Penguins successfully killed that opportunity, much to the crowd's approval. 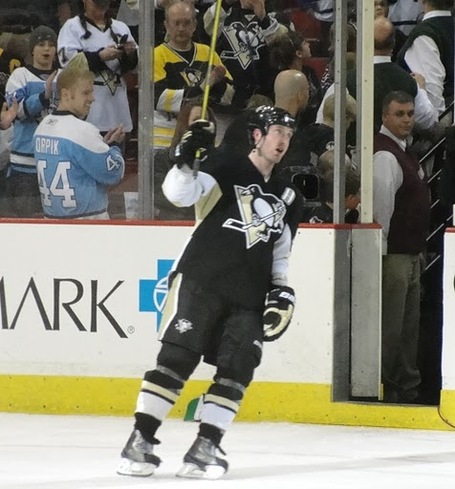 Are you not entertained? (credit photo: PensAreYourDaddy)

After a dangerous and unsettling pass by Tyler Kennedy, Maxime Talbot found himself with Craig Adams on a 2-on-1. Talbot streaked down the left wing and fired a slapper over Smith's glove to make the score 3-1 Penguins.

In the last few minutes, the Pens decided to pour a couple more on. After not cracking the score sheet all night, Sidney Crosby decided he'd had enough of that nonsense and put one short side on Smith. With just over one minute remaining, Deryk Engelland of all people ripped a slapper past a badly out-of-position Smith to make the score 5-1, and that's where the proceedings would end.