Share All sharing options for: Is Geno's shift length really that bad?

There has been a debate in some of the threads here at PensBurgh regarding Evgeni Malkin's average shift length. Is it too long? Is it longer than it was before? How does this compare to other young stars in the game?

Answers after the jump.

First of all, what's an optimum shift length?  It turns out that answer isn't easy to come by, and that's probably not surprising.  The average even strength shift length is roughly 40 seconds, and it turns out that might also be a good approximation for optimal length according to that linked article by Gabe Desjardins, although the data have lots of variables and so the conclusion is probably not good for a one-size-fits all situation.  The reasoning is that shots for vs. shots against reaches the break-even point at 40 seconds.  After that, you start entering dangerous territory.

With that in mind, let's look at the Big Three forwards for a few teams.  First, the Penguins, with Sidney Crosby, Evgeni Malkin, and Jordan Staal: 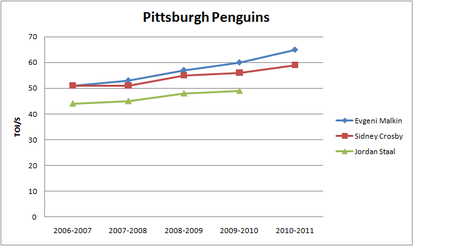 All three have increased their average shift length over the past five seasons.  Of course, Staal's numbers for this year don't exist yet, which explains the shorter line for his data.  Crosby and Malkin are both up from where they were last year.  This might be for a couple reasons.  The first is that the team has been playing from behind quite a bit this season so far, and so Dan Bylsma may be throwing them out together more often for longer periods of time late in games to try to play the two-headed monster card.  The second reason has to do with the poor power play; if the power play had scored more often, perhaps both Crosby and Malkin may have taken fewer 1:30 to 2:00 shifts.

Or, maybe, Malkin is just staying out too long.  Unfortunately, I am not sure how to strip out special teams shifts from even strength shifts.  NHL.com does not have that information, and neither does the venerable behindthenet.ca.

So, as a comparison, let's take a look at the name that everyone thinks of when they think of long shifts: 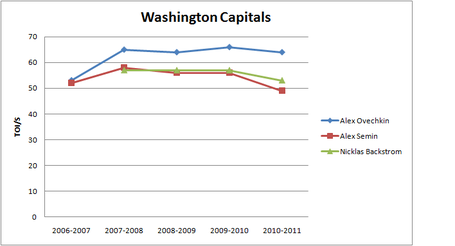 Here we see that, from 2007-2008 on, also known as the season he became the first to score 65 goals since Mario Lemieux did it 12 years earlier, Alex Ovechkin has had an average shift length in excess of 60 seconds.  The Capitals other two big stars, Alexander Semin and Nicklas Backstrom, have seen their ice time diminish, probably as a result of more talent coming up behind them that the team can depend on.  This is, unfortunately, a luxury the Penguins arguably have not had. 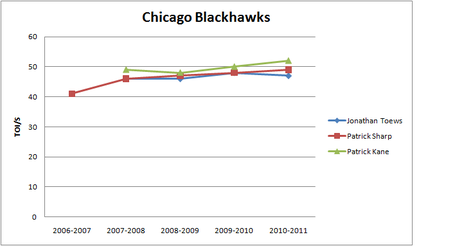 The story here appears to be a bit different.  All three of their big name forwards have had relatively equal shift lengths, and after Patrick Sharp in 2006-2007, all three have been relatively stable as well, not increasing or decreasing too much between seasons.  Possible reasons for this might be that none of Sharp, Jonathan Toews, or Patrick Kane are Crobsy- or Ovechkin-level talents, or perhaps Joel Quenneville has a stricter coaching style than either Dan Bylsma or Bruce Boudreau.

So what have I answered here?  Not much, to be honest.  Without even strength data to use, the power play is going to taint the numbers irretrievably.  However, in comparison to other star forwards not named Alex Ovechkin, Malkin's average shift length is indeed quite long.