The Few. The Proud. The Mutual Teammates of Crosby and Ovechkin.

Share All sharing options for: The Few. The Proud. The Mutual Teammates of Crosby and Ovechkin.

Sidney Crosby.  Alex Ovechkin.  They have a unique and weird relationship that's been beaten to death.  Fierce rivals on the ice, compared to each other in almost every sentence, you know the drill.

Hockey, though, is a team game.  So what of the players who've been on the same side as both?

Sergei Gonchar and Evgeni Malkin could be considered members of this club, but officially they're not.  Both of them have been Crosby teammates with the Pittsburgh Penguins and Ovechkin teammates in various tournaments representing Russia over the years.

It's probably for the better that Malkin and Gonchar are omitted, as pretty much every member of the club is not only normally a bit player but also universally disliked by either the Washington or Pittsburgh fan base -- sometimes both!

Rico Fata became the charter member of the "I've played with Crosby and Ovechkin" club during the young phenoms rookie season of 2005-06.  Fata (a former 6th overall pick himself) recorded a career high 34 points with the Penguins the season before the lockout and was actually considered a viable piece of the Pens season for 2005-06, which goes to show you how deluded the team was at that time.

All he did in 2005-06 with the Penguins was put up a stat line of 0 goals, 0 assists and -5 in 20 games.  The Penguins had seen enough and waived Fata, who was claimed by the Atlanta Thrashers.  Fata lasted six games in Atlanta, recording zero goals and one assist before Atlanta decided they were done and waived him.  For some reason Washington thought it was a good idea to put a claim on a guy who's been waived twice in five weeks, so they brought Fata into the fold.  The speedster actually settled in a little in DC, finishing the season with 21 games,  3g, 3a and was a +3 on a fairly poor Capitals team.

The Caps brought Fata back for the 2006-07 season, but then after 10 games they came to their senses and gave up on him, sending him through waivers and allowing him to move on to the DEL.  Fata has gone on to play in the Swiss league, where he actually appears to be having a nice professional career.

After the jump, the rest of this "prestigious" club... 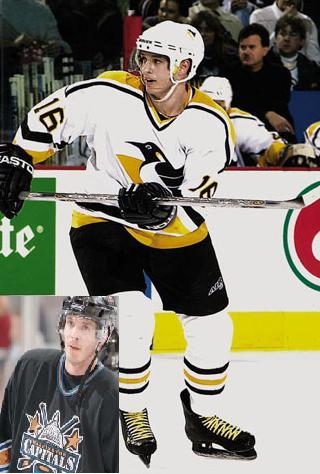 The next star-crossed bum on the list is Kris Beech.  In 2001 he was the center-piece of the equally tragic trade that sent Jaromir Jagr to Washington.  After flaming out of the Pens organization, Beech bounced around like a pinball -- Nashville to Washington to Columbus to Vancouver back to Washington and then the Penguins decided to claim Beech in January of 2008, probably only to keep Washington from sending him back to Hershey, where Beech was an effective scorer.

Beech, really technically, isn't even in this club.  Yep, he can't do this right either.

Even though he's generally recognized as a mutual teammate of Ovechkin and Crosby, Beech never actually suited up for a game that Crosby played in.  Beech played in four games with the Pens in February (and unsurprisingly recorded  0 points) while Crosby was on the shelf with the high ankle sprain injury.  Then Beech saw the bench for the rest of the season, save the very last regular season game in Philly, when the Pens held Crosby out of the lineup.

Once the 2008 season ended, Beech also made the jump across the pond and is with his third season in the SEL.

Cooke, a long time Vancouver Canuck, was a 2008 deadline trade to a Caps team that was surging back to the playoffs.  Cooke put up seven points in 17 regular season games and 0 in the seven playoff games.  If memory serves, the Caps were mildly interested in re-signing him that summer, but did not spill any tears when he decided to test the market.

As a Penguin Cooke slotted in nicely with Jordan Staal and Tyler Kennedy to form a beast third line, and his PK'ing and agitating skills made Ray Shero go outside of standard procedures when he signed the 32 year old non-core player a three year contract extension this past summer.

Matt Cooke is the only player in the club who has a Stanley Cup ring, and he currently is the leader in goals, assists and games played. 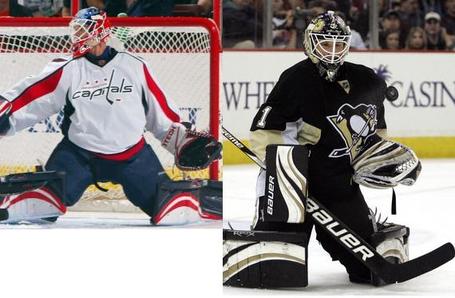 The summer after adding Cooke via free agency, the Penguins struck again and added Caps goalie Brent Johnson.  Johnson was in DC from 2005-06 to 2008-09 and was seen as a good player, great teammate but bad on durability and avoiding injuries.

He's been exactly as advertised and at times has played better than just "good".  The Pens also decided to renew Johnson's contract and have the veteran netminder through the 2011-12 season.

Johnson also has the honor of being the only member of the club that is mutually respected by both fan bases, which says a lot about a guy's character and personality when both Pens and Caps supporters universally agree on something.  Something that doesn't involve hating the Flyers, anyways. 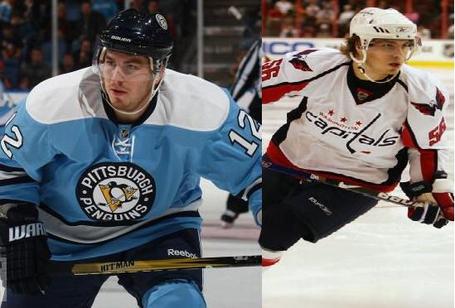 A former 2nd round pick of the Caps in 2004, the famous "son of Ray" tormented the Wilkes-Barre Penguins in the AHL for the better part of four seasons from 05-06 to 08-09.  Bourque got 12 NHL games with the Caps, mainly as an injury replacement.  After training camp broke in the fall of 2009, Bourque was veteran enough to where he needed to pass through waivers.  He came close to making the Caps, but fell just short.  (See what I did there?)

The Caps put Bouque on waivers and if he went unclaimed, C-Bo would go back to the AHL, where he'd inevitably dominate a league he was a superior talent in.  Not wanting that to happen, and thinking a 24 year old on a cheap contract who's shown skill in the minors but never gotten a chance in the show, Shero made the low risk move of claiming Bourque away from the Caps.  Not a bad idea in theory, but when it was executed it didn't end well.

Bourque didn't endear himself to Pens fans and quickly worked his way down the depth chart with seemingly uninspired play, and failure to produce points (0 goals, 3 assists -4 in his 20 games).  By December 3rd Bourque suited up for a game against the Avalanche and only played 4:26.  The writing was on the wall, his time was up.

The Pens finally bit the bullet and waived him, probably fully expecting the Caps to claim Bourque and send the diminitive forward back to the minors.  Which is exactly what happened.  Back in Hershey, Bourque put up 70 points in 49 games, then went on to be named the MVP of the playoffs for another championship winning Bears team.

Over the summer, Bourque decided not to take the Caps qualifying offer and instead jumped ship to the KHL on a $1 million contract.  Along with the NHL, you can add the KHL to another league C-Bo flamed out of, he lasted eight games (1g, 0a) and was unhappy with things, so he was released and jumped to the Swiss league.

Fittingly, Bourque has the smallest amount of total shared time being a Crosby/Ovechkin teammate of anyone in the club.

So that's the list- two guys largely joined the Penguins because the Pens organization didn't want them going down to Hershey to tear up the minor leagues.  The other two were additions in free agency by the Pens.  Sooner or later though, the Caps will get into the game when they sign one of Crosby's former teammates.  The club will only grow.

And, no offense to any of the members, the club can only gain in prestige with the eventual addition of new members.