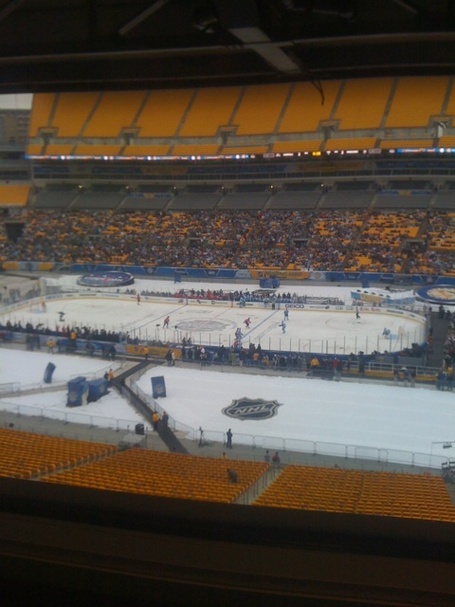 Hello everyone, live from the press box in Heinz Field, here's the live thread for the Pens v. Caps alums

9:51 -- I was a little late getting moving this morning (don't know how those old guys did it) so I'm just now set up and everything.  The score is 3-3, 6:30 left in the first period.  I have caught that Craig Simpson has scored two of the Pens goals.

9:54 -- Not many helmets out there for the old boys, it's mainly just toques....A "Let's Go Pens" chant fills the stadium, the lower bowl is almost all the way full in the two areas that they've opened it up for.

10:02 - Dan Potash interviews Mario at intermission.  Lemieux thanks everyone for coming out and says he feels pretty good.  Don't think he stopped smiling the whole time.

10:05 - Potash goads Rob Brown into doing a windmill for old time's sake, he went from like the blue line all the way to the goal-line too.  Crowd loved it.

10:18 - The second has started.  Bob Errey's playing with Lemieux now who is toying with everyone out there, making some sick setups.  His hands are definitely still a step above.

10:20 - Gary Roberts and Ron Francis are both wearing #10 and playing at the same time (with Phil Bourque).  A whole lot of awesome out there right now.

10:23 - Caps score to make it 4-3 when Dean Evason (currently the Caps assistant coach of "grab your sack!" fame) makes a nice pass to Mulvey.  The crowd boos an awful lot during the jumbotron replay.