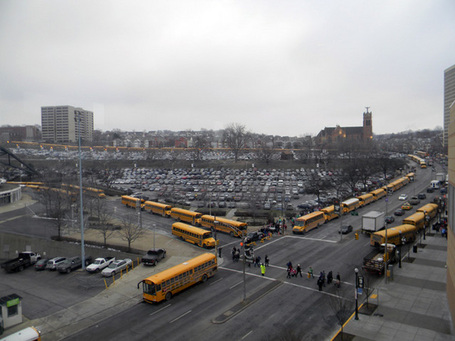 Over on Puck Daddy, former pro player Justin Bourne wrote a recent piece about surviving the mid-season lulls that can pop up in hockey, now that everyone is established in their rhythms and routines.  The same could especially be said for the Pittsburgh Penguins, who are in the midst of an 11 game winning streak.  Sleep, skate, nap, eat, play game, win, travel, sleep and repeat.  That's about it.

Perhaps that's what the Penguins had in mind when they invited 11,000 school children to practice today.  It keeps things fresh, lets the kids see players in person and also add some high-pitched energy and cheering for what would otherwise be just another boring practice on a gray day.

As Penguins.com said, Eric Godard even came out early with a bunch of candy in his helmet and distributed it over the boards for some of the kids, nice to see the big guy getting in the spirit of things.  You might think that's someone else's job, but Brooks Orpik did not practice, which has been common for him lately.  Evgeni Malkin was also absent as he recovers from what's believed to be a knee injury.

That aside, a nice way for the Pens to have basically free advertising to what could be the next batch of fans growing up.  And for the kids, it doesn't seem like much of a choice between sitting in a classroom all morning or going down to the Consol Energy Center to watch Sidney Crosby and company take the ice.  Just another great initiative by the Pens, who continue to have excellent marketing and PR strategies over the board.