Is Jaromir Jagr coming back to the NHL? And could it be with Pittsburgh?

Share All sharing options for: Is Jaromir Jagr coming back to the NHL? And could it be with Pittsburgh? 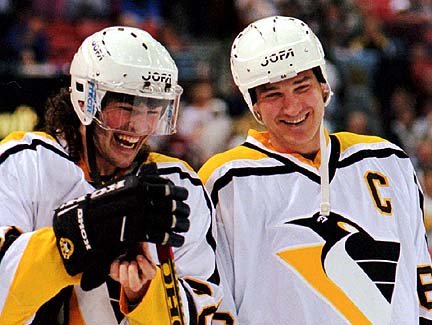 Jaromir Jagr started his professional career in Pittsburgh and had a lot of good times with Mario Lemieux and the Pittsburgh Penguins....Would the mercurial Czech star be willing to end his career symmetrically by signing with Pittsburgh?  It could happen, but Jagr isn't exactly one not to talk about a lot of possibilities

"NHL is a special League, no question about it. It has a lot of history and I think I was playing 18 years in the NHL and then I decided I am going to go back to Russia, and I can not say anything about my decision because I said I am not going to look back.  I'm just going to finish my contract there and then I am going to make a decision what I'm going to do next. But they treat me so well in Russia that it would be tough to leave them. On the other side, I want to maybe try to come here."

That's what he said to NHL.com. (emphasis mine).  No doubt Jaromir Jagr is the master of double talk -- read it again-- he likes Russia, they treat him well, he enjoys it even though the NHL is a special place and one he also holds dear and enjoyed his days there.  Maybe Jagr comes back to the NHL, but maybe not.  A return could happen, but don't count on it.  Until it does.  Or he re-signs in the KHL, where he also loves.  This situation could unfold to be about the closest thing hockey has to Brett Favre.

Never taking what Jagr says as much more than stream of consciousness, also remember this quote from last year:

"I would play for the minimum salary. I would play for $350,000 just for [Mario Lemieux] because I owe him my hockey life. I want to pay him back because he has made me what I am...besides my parents."

Talk is one thing, and when it comes to Jaromir Jagr let's be honest: he's never met a microphone he didn't like speaking into.  Just because a thought crossed his mind, it doesn't mean he's actually going to follow through with it. That it doesn't mean he didn't mean what he said, of course he meant it at the time.  Otherwise, he wouldn't have said it!

Given his play in his final season with the New York Rangers, his production in Russia and in the Olympics; there's no doubt he could find a role as a winger to Sidney Crosby and/or Evgeni Malkin if he actually went through with it.  The money from Pittsburgh could be there -- though certainly at a discount from what other NHL teams could afford.

(Jump for more perspective on just how it could happen....But why we shouldn't count on it)

Something tells me the Penguins would even pay him more than league minimum, though in their cap crunch surely they wouldn't be able to be the highest bidder on the marker.  When Bill Guerin and Ruslan Fedotenko's contracts come off the books this summer, Pittsburgh could realistically pay Jagr about $3 million, possibly more if they want to make more sacrifices of roster players like Chris Kunitz ($3.75m).  Regardless, sigining Jagr would mean Pittsburgh would likely have to fill a top 6 forward role with a rookie on an entry-level contract like Luca Caputi, Nick Johnson or Eric Tangradi.  That doesn't leave much room for depth, especially if in the case of an injury. It's a given though that if Jagr's seriously interested in a return to Pittsburgh, the team can make it happen.

Jagr has a reason to redeem himself more than just for Lemieux.  JJ requested a trade three times in his final season here.  Some of it was because of his own pressure: Jagr knew that Pittsburgh couldn't afford to spend 1/3 of their budget on him when it was time to re-sign players like Martin Straka, Alexei Kovalev, Robert Lang and Darius Kasparaitis -- all of whom were impending free agents.  Pittsburgh didn't end up keeping any of them in that economic climate of the sport; but that's a different story for another time.  Jagr's been booed every time he touches Pittsburgh ice since his 2001 trade to Washington, something he'd no doubt like to rectify in a perfect world.

All of this is getting way ahead of things at this point, beause it's all talk, speculation and wild dreams right now.  No one likes to talk and speculate more about what he "could" or "would" do than Jagr.  He's got a million plans, dreams and aspirations; but at age 38 Jagr doesn't have enough time to fufill all everything (and fatten his bank account in the process).  So, for the final word, let's leave it with Double J:

Playing both sides, as always,  he could be a politician.  Bottom line is, let's not read too much into anything until the ink is on paper and Jagr's in a jersey for 2010-11.  Jagr's always been a wildcard, expect the unexpected.  Fairytale endings usually only happen in Disney cartoons, but when it comes to Jaromir Jagr and his whims, surely anything "could" be possible.  What actually will happen is anyone's guess.