Sid the enemy: USA/Penguins fans are walking in Flyers and Caps shoes for a day (and that never ends well)

Share All sharing options for: Sid the enemy: USA/Penguins fans are walking in Flyers and Caps shoes for a day (and that never ends well) 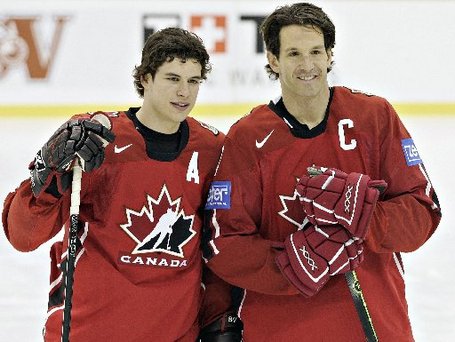 Sidney Crosby is not wearing Pittsburgh's black and gold, and for many Pens fans this is the first (and maybe only) time they won't be rooting for #87.

Pensburgh gets great support from our friends and commenters from Canada and Europe but it's safe to say-- across the board -- the majority of the Pittsburgh Penguins fans are American citizens.  So, for the first time since Sidney Crosby was drafted in 2005, most Penguin fans will have a reason to NOT cheer for Crosby.  Country does (and should) come first.

Still, it's a most unusual position to be in; Crosby is the franchise player of all players, and the clear face of the NHL in terms of everything from advertising campaigns to league-wide jersey sales.  Sid broke Mario Lemieux's franchise record for rookie scoring, he was named team captain, he's won a scoring title, MVP and Stanley Cup.  All of this has been accomplished through four whirlwind seasons, and all before his 22nd birthday.  As loyal Penguin fans in a state of awe, we've been more than happy to be along for the ride, cheering him every enjoyable step of the way.

We've also been along for the bumps in the road like the broken foot, the serious high ankle sprain, groin injuries and we've seen him fight through pain and take countless slashes, high-sticks, hooks, chops, hits, punches, facewashes, jeers during every single game.  All the while we've grimaced with him, sharing the pain if not physically than certainly pyschologically and emotionally.

Now, at least for one day, American Penguin fans are in the same dreadful boat of Crosby's rivals like the Philadelphia Flyers, Washington Capitals and so many other NHL teams.  Like their fans have done so many times, we'll only be able to watch as #87 beasts up and shifts into a higher determination and gear that no other player on the planet possesses.

Unlike in Philly and DC, we won't mock Crosby and uselessly taunt him foolishly.  We will be just as helpless as Crosby plays his game and doubtlessly gives it his all to help his team win.  As long-time Crosby obsevers, we also know enough to know he's effective to a ruthless and unapologetic degree when it comes to making a play to win.  When the pressure is on and it matters most is when Crosby shines brightest; which makes this high-stakes and emotional game (in his home and native land, no less) all the more daunting.  Gulp.  So this is what Flyer and Capital fans must feel before a big game.

May God help us all.  And may no one get hurt.  Somehow getting a better fate than Flyer/Capitals fans in a big game against Crosby would be nice too, though I think we know enough to know how this story is going to end.