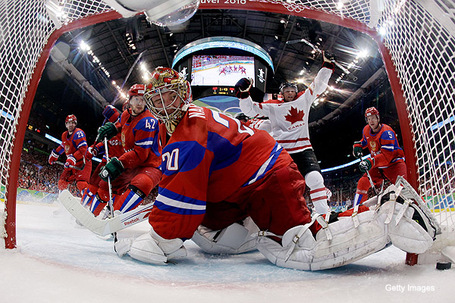 It was one of the most anticipated games of the entire year, and a game billed as a Sidney Crosby vs. Alex Ovechkin battle; but neither made much impact on the war.  Canada roared out of the gates and easily overwhelmed goalie Evgeni Nabokov and Team Russia by a score of 7-3.

Ryan Getzlaf opened the scoring just 2 and a half minutes into the game to bring Canada out of the gates strong, then Dan Boyle (much maligned on his selection over Mike Green) strongly brought the puck into the zone and ended up scoring to make it 2-0 on the power play.  Rick Nash blew by Ovechkin in the neutal zone and took advantage of a great pass from Jonathan Toews to make it 3-0 shortly after the Boyle goal.  The floodgates were opened and there was no stopping the boys from the Great White North.

Defenseman Dmitri Kalinin would score from the point on a heavily screened Roberto Luongo to bring the Russians back to 3-1, but Brendan Morrow would score before the first period was out to make it 4-1 Canada and remove pretty much all of the drama.

Canada wouldn't let off the gas, scoring two more goals in the first 4:07 of the second period, one from Corey Perry and another from Shea Weber (on a questionable backcheck from Ovechkin).  Finally the Russians would relieve Nabokov at this point, but it was too little too late.  Russia would show a little life, Max Afinogenov and the Penguins own Sergei Gonchar scored goals sandwiched between another Perry goal to close out the scoring, all of it in the second period.

In the end it was way too much Canada.  They were faster, made better decisions, got more chances and capitialized when it counted.  They move on to the semi-finals in what must be a supremely confident state.  If they can match their own desire from this night two more times, it's difficult to imagine anyone denying them of the gold.  But that's why they play the games, and in this tournament of twists, turns and close calls, no one's just going to roll over and give it up.