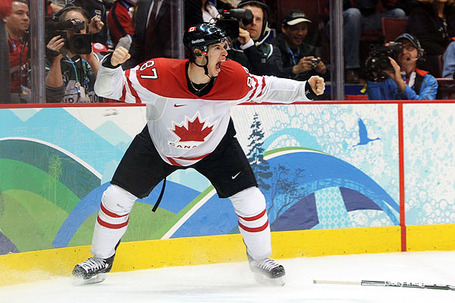 Sidney Crosby knew his usual fans wouldn't be on his side, "[Pittsburgh is] an American city, so I'm sure they're not going to be cheering for me".  That didn't stop him from scoring the game winning goal and singing along to "O Canada" afterwards.

Last spring Captain Crosby led the Pittsburgh Penguins as top goal scorer all the way to the Stanley Cup.  Now, nine months later, Sid took on the role of #1 center for an Olympics that took place IN Canada (with all the inherent pressure) and scored the gold medal winning OT goal to justify the hopes and dreams of the millions of his countrymen.

Straight up: Sidney Crosby is the best player in hockey, the biggest money player the game has seen in recent memory, and has won everything there is to win at every significant level.  At just 22 years old, Crosby has broken Mario Lemieux's team rookie scoring record (both as 18 year olds), Sid's is a league MVP, a Stanley Cup Champion and has the OT GWG to win the Olympic gold medal.

The Alex Ovechkin backers will say AO got the short end of the stick: being as hockey's a team sport and Ovie's been on over-matched teams playing for Washington and Russia over the years.  They'll say Ovechkin's is the best with a unique skill-set of physicality and offensive ability.  Ovechkin's the two time NHL MVP -- and working on his third this season -- and he has so much passion that you can't deny his greatness.

Fine.  All of this is true.

But you also can't deny the undisputed golden boy and the #1 winner of the hockey world.  His name is Sidney Crosby, he plays from Canada and for the Pittsburgh Penguins.  When it counts, he not only is there, but he comes up big, and is on the winning side of things on the sport's biggest stage.

Will it end soon?  Not according to Sid, who was asked what he'd do after he wins everything he said: "try to win everything two or three times."

Luckily for the American fans of the Pittsburgh Penguins, the Winter Olympics won't come back for four more years.