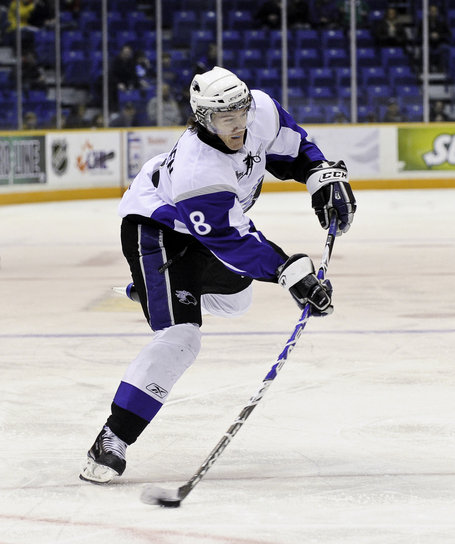 Hooks and I have been pretty fortunate to land a few interviews with Penguins prospects over the past few weeks and hopefully we'll continue to have those opportunities down the road.  I just also want to give a public thanks to Derek Zona from Copper N Blue and his endless efforts to hook us, and others around the network, up with these interviews.  Here's to hoping Hooks and I can say something down the road along the likes of, "Yeah, I talked to him before he was famous."

Let's start with how the season is going.  Staying healthy, having some fun out there?

Is your time with St. John any different than your previous two years with Shawinigan?

Well it's a little different system.  A little more relaxed.  We have a great group of guys here and we had a 22 game winning streak so we have a great team.  We're number one in Canada right now and everything's going great.

How would you describe your style of play?  Is it offense first or defense first?

Probably offensive first, playmaker who can play in front of the net and in the corners.

If you compared yourself to an NHLer who would that be?

I'd compare myself with (Anaheim's) Corey Perry, getting in front net, tipping.  Good speed with vision and a shot.

As a prospect in Pittsburgh's system, do you find yourself working a little harder to get that extra edge?

Yeah for sure.  You always have to push yourself to the max.  Obviously you want to do the best you can, make an impression in Pittsburgh.  I chose to come back with St. John, work harder and get better for next year.

Are you in contact with anyone from the Penguins regularly?

Yeah I talk to Tom Fitzgerald regularly, the player coordinator.  He calls here and there, asks how it's going.  Talks to the coach probably once a week because me and Simon Despres are teammates.

I spoke with Simon up at the draft, but didn't have a chance to catch up with you.  So let's go back a bit: What was that like for you?

Oh it was great.  I went in not knowing what was even going to happen because obviously I was a 19-year-old likely to get drafted but you never know as a 19 year old as to where you're going to go because a lot of teams are looking at the younger guys who are prospects to improve in the future years.  So I was happy obviously to get drafted by a great team like Pittsburgh.

What team were you rooting for as a kid?

I was an Ottawa fan.  I'm from the Quebec side of Ottawa and I grew up going to Ottawa games so I was a Sens fan.

Getting back to your style of play, is there any aspect of your game you think you really want to improve on?

Always want to improve on my defensive style of play, since I'm an offensive player.  You always want to work on that.  Not having any goals against, which I've been good this year with I think a +41 so far this year, which is great.  Just want to make sure I can put some defense before offense.

Is the goal ultimately to be more of a two-way forward?

Yeah.  I always want to be an offensive presence but sometimes you have to adjust your game and be able to play every situation in the game.

The team usually just hangs out in the hotel so there's good bonding for the team.  We haven't had that many road trips since the start of the year.  It goes by pretty fast with the morning practice, meals which take a while and then we just hang out in the room, watch some TV and prepare ourselves for the game.

Again, special thanks to Derek Zona, Nick Petersen and the St. John Sea Dogs for setting this up.