Stats show the studs and who's better off on the bench

Share All sharing options for: Stats show the studs and who's better off on the bench

Watch enough games and you might lose the forest through being amongst all the trees.  Using behindthenet's advanced statistics, let's dig into some deep stats and see who's measuring up and bearing a lot of weight, and who's just a passenger, relying on teammates to pick up the slack.  For you non stat-heads, don't worry, we'll explain it every step of the way.

(All looks are at a minimum of 10 games played) 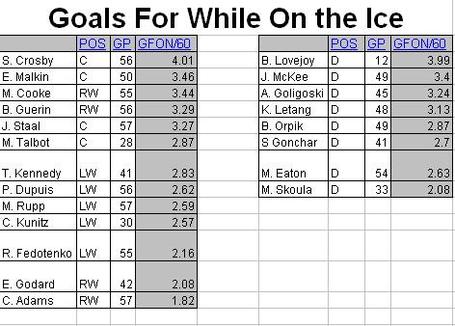 (What this means: If Sidney Crosby spent 60 minutes on the ice and play remained 5 on 5 at all times, the Penguins would score 4.01 goals.  based off of how many goals he scores relative to the time he spends on the ice.)

This shows what many believe: the Pens need better scoring wingers.  Pascal Dupuis, Chris Kunitz and Ruslan Fedotenko are usual Top 6 wingers, but they're among the bottom of this metric.  Unsuprisingly, Crosby and Evgeni Malkin are the team leaders. 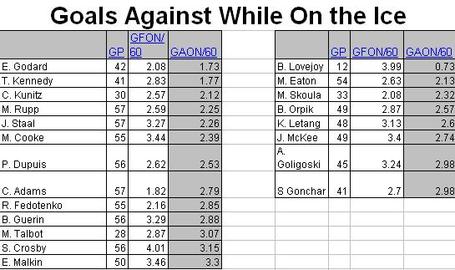 (What this means: If Ben Lovejoy spent 60 minutes on the ice and play remained 5 on 5 at all times, the opponents would score 0.73 goals against the Penguins.  This is based off of how many goals he scores relative to the time he spends on the ice.)

Impressively, all the Penguin defensemen are under 3 goals a game.  Sergei Gonchar brings up the rear, but he also draws the most difficult assignments, which explains it, also why Malkin and Crosby are at the bottom for the whole team...For all the crap Eric Godard takes, at least goals don't go in against him much on the few moments he spends out there...Also interesting, and probably expected that the usual 3rd line of Jordan Staal, Tyler Kennedy and Matt Cooke all are towards the top of the heap. 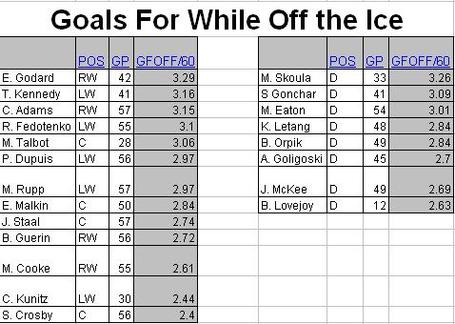 (What this means: Not good to be near the top, it's the the number of goals scored per game for every 60 minutes the player is sitting on the bench, assuming all 60 minutes are played at 5 on 5.  For instance, if Eric Godard is glued to the bench for the full 60 minutes -- big stretch, huh? -- the Pens would score 3.29 goals in that game)

Guys who are frequently benched, like Godard and Martin Skoula, lead the way in this metric.  Somewhat surprisingly, the team has seemed to put the puck in the net at even strength when Gonchar isn't out there, and to no one's surprise a lot of offense is generated with Adams and Max Talbot on the bench. 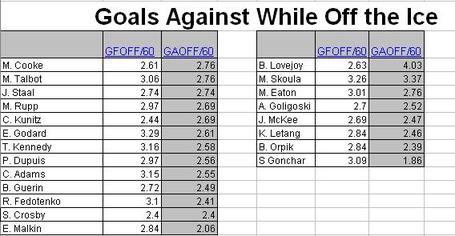 (What this means: This is an area you want to be around the top, it means that if Matt Cooke sat on the bench for a ful 60 minutes of 5 on 5 play, the Pens would give up 2.76 goals, while if Bill Guerin rode the pine the whole hypothetical game, the Pens would only yield 2.49 goals)

This stat, perhaps more than any other may be skewed by ice-time.  Would the Pens really be better served if Skoula played a whole game and Gonchar sat the bench the whole time?  No, but it does indicate that goals go in more when Skoula is on the bench, compared to when Gonchar is.  This can obviously be explained by the level of competition and time spent on the ice, but I think it's no coincidence many of the Pens best defensive forwards (Cooke, Staal, Maxime Talbot) are towards the top of the heap. 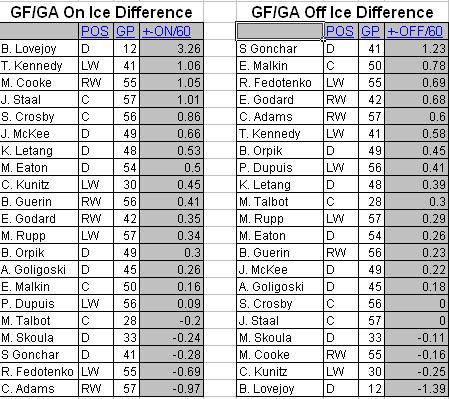 (What this means: The graph on the left is the difference of the first two charts, basically showing that the Penguins score 1.06 more goals a game while Tyler Kennedy was out on the ice, compared to when he was benched. The chart on the right here shows the difference of the third and fourth, with the best metrics coming towards the bottom in terms of being off the ice.)

Ben Lovejoy has scored high on about every metric, but he's only played 12 games and has only played 16:37 a night, so he's skewed but he has played well.  Cooke and Staal also look in a good light by this measure while Gonchar and Fedotenko don't.