Who are the Penguins #1 rival?

Share All sharing options for: Who are the Penguins #1 rival?

If you believe the recent poll over at Winging it in Motown, there's probably no less than three teams that consider the Pittsburgh Penguins their primary rival. But who do we as Penguin fans think of as our #1 rival? 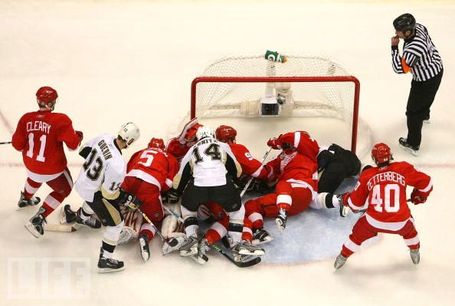 For Detroit it may just be the recency of the Stanley Cup finals battles and the high stakes that produce short tempers and intense exchanges. The Pens have locked horns with the Red Wings almost as much as they've matched up with any opponent in the entire league, but unless the two go to the SC Finals every year, they're just not going to see enough of each other to keep the fires stoked. Plus there's seemingly more hate coming from Detroit fans to Penguin players than the other way around. I don't like seeing Henrik Zetterberg or Pavel Datsyuk doing their thing, but I don't quite have the vitriol to chant that they suck.  Still you've got Marian Hossa play the role of Benedict Arnold, Max Talbot slashing Datsyuk's bad foot, Crosby's game 7 injury and Marc-Andre Fleury's last second stop on Nicklas Lidstrom and we've had our memorable moments.  That each has celebrated a Cup in the OTHER's barn the past t wo seasons only makes the fans that more on edge. 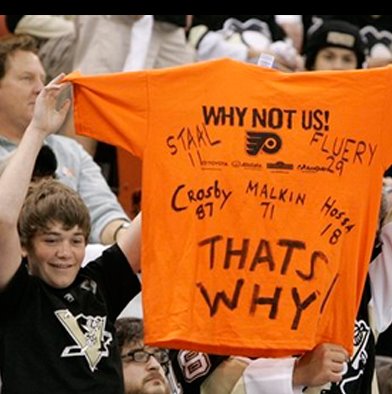 Seasoned Pens fans (we won't call them old) would probably tell you the Philadelphia Flyers are the primary rivals and not have too much more debate. The natural cross-state rivalry includes playoff battles in the good old days, rough and tumble matchups with fights galore. Pens fans everywhere know the monumentous struggle to even win 1 game in the Spectrum back in the day. Pittsburgh literally couldn't do it for years.

The rivalry's been renewed in recent years with Mike Richards and Sidney Crosby don't much like each other, Derian Hatcher removed Crosby's teeth.  Scott Hartnell and his dumbass hair.  Hartnell biting Letang.  The team that employs Chris Pronger.  Feel the blood pressure rising yet?  Pittsburgh knocking the Flyers out of the playoffs in the past two seasons has made the results on the ice a little one-sided, but the hate definitely flows both directions. 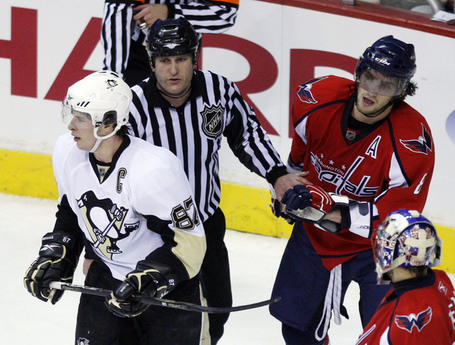 And then there's Washington. With all the attention of the media and internet, it's not a stretch to say Crosby v. Alex Ovechkin is the biggest individual rivalry in hockey ever. Beyond that, the teams have history too, most notably several playoff series in the 1990's/ early 2000's, in which Pittsburgh came out victors seven out of eight times.  Just mention Marty Straka and Sergei Gonchar's name in the same sentence and see how a Caps' fan takes it.  There's AO on Gonchar's knee, Fleury robbing Ovechkin in Game 7, Crosby and Ovechkin's duel hat-tricks, David Steckel's OT goal, Peter Bondra, Mario Lemieux.

I'm not going to open up a poll, because than anonymous users and fans of other teams can skew the vote, and we're looking for Pens fans thoughts on this one. So leave a comment and we'll debate and discuss. Who's the #1, primary rival for the Pittsburgh Penguins? Is it still Philly, no matter what? Have Ovechkin and the Caps superseded them? Or is it Detroit, the team always in the way for glory the Pens rival?