Share All sharing options for: Sidney Crosby and Brooks Orpik lead the Pens past the Maple Leafs 5-4 (SO) 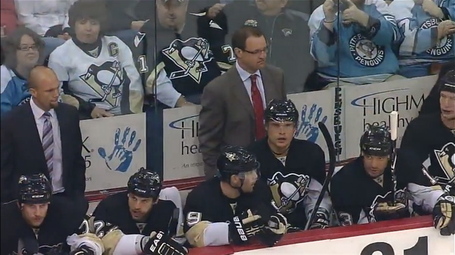 Pensburgh sign behind the bench, to coach Dan Bylsma's left.  Not enough thanks can go to commenter Pensareyourdaddy (and Cari for the screengrab)

Back and forth game today, unusual from it's starting time (5:00) to the number of swings in who was winning (7) to the ending (shootout).  The Pittsburgh Penguins out-paced the Toronto Maple Leafs 5-4 in the long run, by virtue of a bounce-back shootout performance by Marc-Andre Fleury.

The game started out rough for the Pens, they yielded two of the first three goals, including one that enforcer Colton Orr chopped in a goal from point blank.  Sidney Crosby got the Pens back into things with two second period goals (to pass you-know-who for the current league lead with 47) to give Pittsburgh a 3-2 lead.  Carl Gunnarsson would bring Toronto right back into the game before the period ended.

In the third, Toronto again pushed a lead this time on a Tyler Bozak PP goal.  Power play goals have been rare for the Maple Leafs, who've been in as much of a rut as the Pens have been for preventing them.  It would take until three minutes left before Matt Cooke deflected in a Jordan Leopold shot to tie the game.

Today's win, coupled with the Devils losing 5-1 at home to Philly, gives the Pens an increased chance of winning the Atlantic.  Of current, Pittsburgh is two points up on NJ, but the Devils have a game in hand (and all the tie-breakers), so it's definitely anybody's division with now just 6 or 7 games left.  The Pens now get two days off, hopefully to return one of (if not both) Evgeni Malkin and Sergei Gonchar to the lineup.