A tour of the new Consol Energy Center

Share All sharing options for: A tour of the new Consol Energy Center

On Friday, the Penguins invited a handful of bloggers to check out the new digs.  Some of the other places (Puck Daddy, Kuklas Korner, Mondesi's House, From the Point, and The Pensblog) have their recaps up and sum it up well.


It's hard to put into words how awesome the new building is, and how much of an upgrade, in almost every conceivable way that the Consol Energy Center will be for players, fans and media members alike.  The Penguins have definitely done their research and due diligence to create a welcoming, state-of-the-art home.  From what I could see they have definitely done it right.

Throughout the tour the Penguins representatives showed us the bells and whistles (well the ones that are installed so far) and he influences.  Specifically the arenas in Columbus, Minnesota, New Jersey and Phoenix were mentioned as venues the Pens borrowed from and picked the minds of those organizations for ideas, tips and suggestions along the way.

Take the jump to take a tour.. 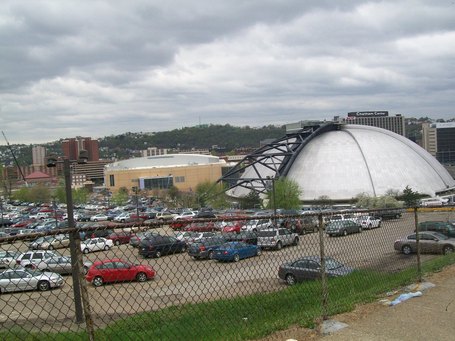 The Consol Energy Center sitting behind the Mellon Arena

The first thing you notice, is this aint Mellon.  There won't be that distinctive silver dome, and really the new arena doesn't outwardly appear to be all that big.  This is in part due to geography, due to the lay of the land they built into a hill, in fact some entrances you'll have to walk up steps to get to the lower bowl, some entrances visitors will have to walk down stairs to get to the lower bowl. 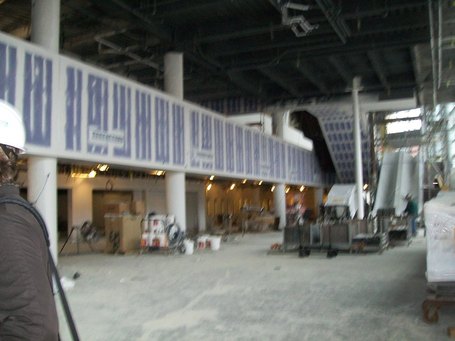 This is a (blurry) view of when you first walk in to the main entrance from Centre Ave.  The new team store is in the foreground, which like all features of Consol will be bigger and better than it's current Mellon Arena counterpart.  As you can tell, it's very spacious and very wide.  Thanks to the glass atrium there's an awful lot of natural light to fill the arena during the day.  To the left of where this picture was taken is going to be an interactive team all of fame that will be multiple TV's displaying and constantly changing the information. 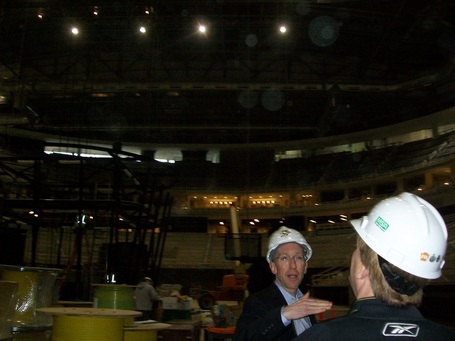 From the lower bowl here, construction is very much in full swing.  In the picture above, the frame of the scoreboard is being assembled as we speak.  The first section of seats (which are black with the occasional row of Vegas gold) for the lower bowl were being installed on the day we took the tour.  It's amazing to watch the hundreds of workers do their dozens of tasks, all in some sort of disjointed harmony. 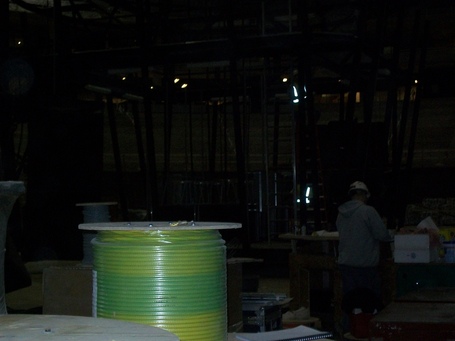 A lot has been made of the scoreboard and sound system, and it was one area that Chris Devivo (the Pens Director of Media Technology) was most excited about.  In Mellon, the most the roof can physically support is the tiny scoreboard that is in there, which has technology out of 1996.  This setup will be state-of-the-art of course, but think of what technology the average person probably had in 1996: a standard television with a tube, and a VCR.  Now imagine jumping up to a HD flat-screen TV with a bluray player and a surround sound.  Big step up, huh?

This seems like as good a place as any to be sure to check out DeVivo's blog for all the tech details on the scoreboard, soundsystem and more.  Expect the Pens to offer a much more interactive in-game experience for what they'll be able to do with the scoreboard and an evenly setup soundsystem. 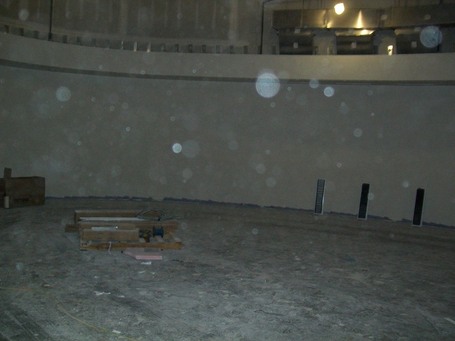 Inside the "bowels" of the arena, the fans won't see these areas but they're still impressive.  This Penguins locker-room, a large oval shaped room that's very unfinished but still showing promise.  In other areas we saw a weight-room that had to be 1,000 sq. feet, training facilities for rehabbing injuries, separate stick and skate rooms.  The facilities are going to be top notch -- under the direction of no less than Mario Lemieux's instruction -- and will offer just another perk of being a Pittsburgh Penguin. 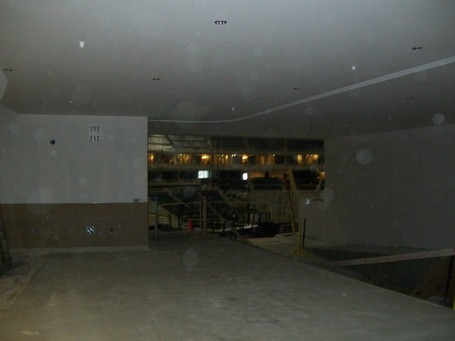 This is a view of a concourse, as if you're trying to buy a beer and you turn.  I'm a bad photographer, so this is a bad picture, but hopefully one can still get the sense of how open and unconstrained the building is.  As one of our tour guides Tom McMillan mentioned, Mellon Arena was intended for a maximum of 11,000 people initially, and obviously once the structure is built you can add more seats and balconies, but you can't exactly stretch out the exsiting walkways.  This is not the case at the Consol, where it's estimated the concourses are four times wider than at the old barn. 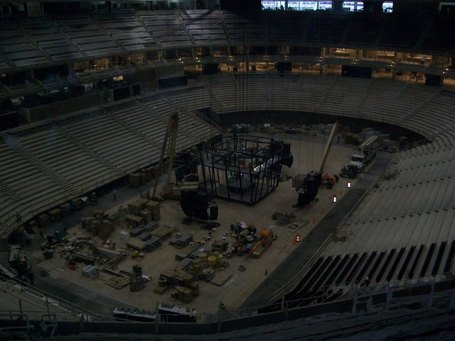 This is the proverbial "worst seat in the house", taken from the very top of the "200" section.  The picture doesn't seem to do it justice, it's a great view of the playing surface and once the scoreboard is raised 30 feet it'll be even better.  The upper concourse is a little steep in terms of how quickly angle goes up, but the Pens said it will still have far more leg-room than at Mellon, which I'm inclined to believe.  I've also personally been in New Jersey's upper bowl and it's steeper and higher up, at least from my own personal experiences. 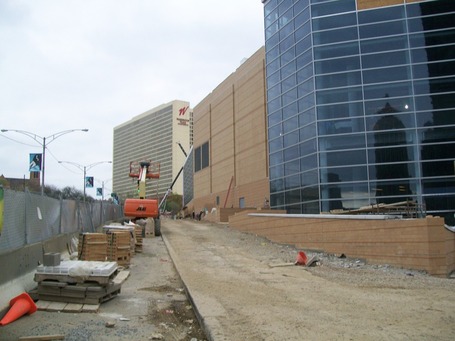 In a nutshell, the Consol Energy Center is everything it's cracked up to be.  It's going to be state-of-the-art, provide excellent views from actual comfortable seats, it'll have televisions everywhere for replays, concourses with sufficient room to walk, enough open space to not feel cramped.  The Pens will be able to offer fans a better game experience with the big jumbotron.  The Penguins did their research and from everything I could see, they got it right.  We'll all miss the Igloo when she's gone, and it won't be the same, but in so many ways things are about to be a lot better.