They haven't sent us ballots for the NHL awards (and they were due in last Sunday) so they must have gotten lost in the mail, or something.  Anyways, here's your Pensburgh editor picks for the NHL Awards


Calder Trophy (rookie of the year)

Hooks: Tyler Myers (BUF) -- Myers is the best defensemen on Buffalo, in terms of points, time on ice and plus/minus.  His offense numbers almost match that of rookie forwards Matt Duchene and John Tavares, who have had fine campaigns, but weren't leaned on as heavily as Myers was.  Jimmy Howard and Tuukka Rask merit consideration as well, but all things considered, Myers has been the finest and he's played every night.

Frank: Tyler Myers (BUF) -- I had my eye on Myers from about November on.  I know it sometimes takes a lot for a rookie to gain some attention alongside the likes of fellow classmen John Tavares, Matt Duchene and Evander Kane, but Myers played a quiet and respectable game all season in Buffalo.  Quiet in that he didn't get much attention from the general hockey population, respectable in that he topped even the veteran defensemen on the team in a variety of categories.

Justin: Jimmy Howard (DET) -- Detroit aged the rookie goaltender like a fine wine in Grand Rapids for what seemed like forever, giving start after start, year after year to the questionable Chris Osgood. Finally this year, Osgood's play was so bad it left Detroit no choice but to bring up Howard, who barely qualified as a rookie.  His play is a big reason that Detroit was able to solidify a playoff spot this season and continue the string of playoff runs.  Top 5 in the league in GAA (2.26) and SV% (.924) while playing 63 games?  No contest.
Other nominees -- Tuukka Rask, Tyler Myers

The rest, after the jump...

Frank: Matt Cooke (just kidding).  Honestly this is one of the hardest trophy's to pick, so I'd really like to leave this one up for debate in the comments.

Hooks: Duncan Keith (CHI) -- The award goes to the best all-around defensemen, so I tab Keith.  He almost held serve with Mike Green offensively (7 points back), with Green getting well over 2+ more minutes per game on the PP.  When it came to even strength + penalty kill time on ice, Green played 20:24, Keith 23:46.  In my opinion, Keith's been the class of all defensemen in the all-around game.

Frank: Mike Green (WAS) -- Say what you will about his defensive game, but Green still finished the season ranked a +39.  I know Chicago's Duncan Keith and Los Angeles' Drew Doughty are also solid candidates, but I say you have to give the nod to Green on this one.  Capital or not...

Justin: Duncan Keith (CHI) -- This one went down to the last game for Chicago and Washington, and I have to pick Keith.  Given that Keith's offense is essentially Mike Green's equal and his defense is better, the choice became clear when Keith's defensive colleagues fell off (either through injury or through play) at the end of the season.
Other nominees -- Mike Green, Drew Doughty

Given to the "player who best exemplifies the qualities of perseverance, sportsmanship, and dedication to ice hockey."

Hooks: Jose Theodore (WASH) -- Theodore not only preserved through a tough season last year, but he had to deal with the tragic death of his infant son.  He's doing a lot of great charity work in Washington, and on top of all of that he hasn't lost a game in regulation in the year of 2010.

Frank: Tomas Holmstrom (DET) -- For sticking around despite all the injuries and surgeries he's gone through lately

Justin: Jose Theodore (WSH) -- I'm going with him for the same reasons as Hooks.

For the goaltender "adjudged to be the best at this position".

Hooks: Ryan Miller (BUF) -- He's got the numbers (41 wins, 2.22 GAA, .929 save %), he's got the pedigree and reputation and he deserves it all.  Simply put, though Ilya Bryzgalov and Martin Brodeur have had excellent seasons, no netminder's been better all season long than Miller.

Frank: Ryan Miller (BUF) -- I can't deny Ryan Miller this one.  The guy played out of his mind for Team USA and is definitely the difference maker in Buffalo's playoff run.  How far he can take them is still a debatable topic.

Justin: Ryan Miller (BUF) -- Just when you thought this guy was going to fall apart and hand the award to someone else, he comes right back and shows everyone just how good he can be.  Along with the rookie Myers, if you want the number one reason Buffalo won their division this year, look no further than this guy.  Other nominees --Evgeni Nabokov, Ilya Bryzgalov

Given to the forward "demonstrates the most skill in the defensive component of the game."

Hooks: Patrick Marleau (SJ) -- Spent the most time of any Sharks forward on the PK (that was a top 5 unit) and has the flashy numbers with 4 short-handed goals. And the advanced metrics to make James Mirtle's honor list are there too.

Frank: Jordan Staal (PIT) -- Many will argue that Jordan Staal is too young to receive this award.  Why he has to be older is beyond me.  He may have only scored two shorties this season, but anyone who watched a Penguins game will tell you that Staal is truly coming into his own.  To say he will one day be one of the league's best two-way forwards is an understatement.  Unfortunately he has yet to earn that title.  Fortunately for Pens fans other teams still have their doubts.

Justin: Jordan Staal (PIT) -- No forward has done more defensively with less help from a defensive system around him than our own Staal brother.  This is not even hometown bias speaking.  The only other forwards who are even close to Staal's defensive GVT (5.9) come from teams with far superior defenses.  Other nominees -- Travis Zajac, Patrick Sharp

Given to the coach "adjudged to have contributed the most to his team's success." 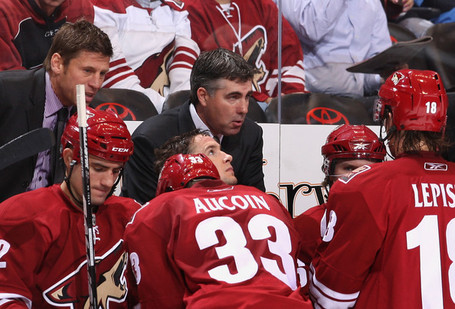 Hooks: Dave Tippett (PHO) -- If anyone thought Phoenix would be the 4th seed in the West after the regular season they're either a liar or someone who belongs in the crazy ward.  Tippett replaced a legend in Wayne Gretky and in the toughest situation of any team in NHL history got the Coyotes to comfortably exceed the highest of expectations.

Frank: Dave Tippett (PHO) --  Here's a guy who, in his first season as head coach, turned a team around in the face of constant bankruptcy talks, sellers, buyers, moving in, moving out, etc.  That alone is enough of a distraction for any coach or player.  To keep his team on track throughout all that AND get them into the playoffs is a feat that should not go unnoticed.

Justin: Dave Tippett (PHX) -- It's not even close.  No other coach deserves this award, period.  They were predicted to finish as low as 28th in the league, and now they're 4th in the very strong Western Conference.  If anyone else wins this award, it's meaningless.  Other nominees (because there have to be three) -- Lindy Ruff, Joe Sacco

Is awarded annually to the "player adjudged most valuable to his team".

Hooks: Sidney Crosby (PIT) -- Am I biased?  Sure.  Crosby's numbers speak for themselves: t-1st in the league in goals, t-2nd in points, 1st in total faceoffs taken, 11th in faceoff percentage (with at least 800 draws), 1st in shootouts.  How's that for value?  Crosby's the league's most important player, has the brighest spotlight on him and he's come through every night.  The award goes to the player with the most value, and it's hard to imagine any player adding more to a team than Crosby has, though there certainly are no shortage of worthy candidates (like Ovechkin, H. Sedin, Miller, Bryzgalov)

Justin: Tomas Vokoun (FLA) -- I hinted around in some comment threads that my Hart pick was likely to be someone who isn't on most people's radar, and now you see why I said that.  Truly the only reason that Florida was even in the playoff hunt this year at all let alone clear into April, Vokoun _defined_ the phrase "most valuable to his team" this season.  Going by GVT, Vokoun had a higher percentage of his team's total GVT (31.2%) than any other player in the league, and it wasn't at all close.  Without Vokoun, Florida is the worst team in the league.  Other nominees (keeping in mind my criteria) -- Steven Stamkos, Dustin Penner

Agree...Disagree?  Feel free to tell us what we got right and how you would have done it differently.