The first goal of this game came as some people were still trying to find their remote control to change the channel to FSN.  A whole 18 seconds in, on the first shot of the game, Peter Regin buried a shot from above the circles through Sergei Gonchar and past Marc-Andre Fleury.  Assists went to Jason Spezza and Daniel Alfredsson, naturally.  Originally, it appeared as if Fleury just missed it through a partial screen, but replay showed that Gonchar managed to deflect the shot with his stick, and Ottawa led 1-0.

The Penguins got that one back, though, when Sidney Crosby jammed home a Chris Kunitz rebound to tie the game at 1.  This seemed to cause the game to turn to an almost comical level of physicality, right up until the point that Andy Sutton annihilated Jordan Leopold with an elbow to the head that amazingly garnered no penalty whatsoever.  I can only imagine this will get a review for supplemental discipline, perhaps even before the night is out.  Given that Leopold lay unconscious on the ice for a couple minutes, it's not surprising that he wasn't able to return to the game.

As time expired in the first period, frustrations reached a head and Michael Rupp shoved Zach Smith out the zamboni door.  Smith retaliated by getting into a fight with Maxime Talbot that honestly looked like they were doing it just to say they did, and everyone left the ice.

The second period was a back-and-forth affair with some offense but a lot of neutral zone play.  Eventually, enough of that and the Penguins had enough.  Evgeni Malkin drew a holding call on Andy Sutton and the team appeared to come to life once again.  The last couple minutes of the period was all Pittsburgh, as the defense remembered how to do their jobs and the offense was able to keep up pressure when they were in the Senators' zone.

The second period also gave us this great screen capture, courtesy of @kylekebert: 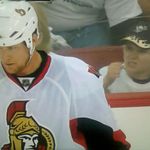 All Penguin fans who were watching the game saw the energy the team had to close the second period and hoped they'd be able to watch the team hit paydirt in the third.  But for fantastic play by Brian Elliott, a ridiculous poke check by Fleury, and a Rob Scuderi-like bid for Vezina, the period would have been a cavalcade of goals.

Kris Letang ended all that, though, with a goal from the point through a screen by old man Bill Guerin, who got an assist along with Crosby, at 15:48 of the third period.  The Senators put some pressure on at the end with the extra attacker, but it wasn't sufficient for their purposes.  Ballgame.

Pittsburgh's defense was altogether more solid this game than last.  Whether it was the coaching staff or the Captain lighting a fire under everyone, whatever it was worked.  Here's hoping the team realizes that this sort of play, this level of intensity is what it's going to take to beat the Senators this series.
Game 3 is Sunday at 6:30.