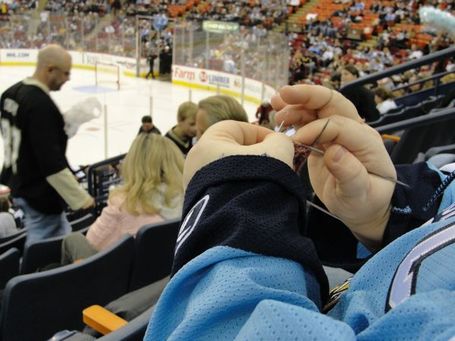 I was sort of "outed" today by PensFan024 as the husband of the lady you may have seen knitting at Pens games over the last year or so.  Yes, I am Mr. Knitting Lady, or maybe she is Mrs. PensAreYourDaddy.  Either way, she is my awesome wife, Michelle.  She knits, she loves hockey, she loves the Pens and she loves knitting at the games.

After a recent game against the Flyers, local blogger Virginia Montanez (aka PittGirl) spotted a photo of us behind the visitor's bench.  Michelle is holding my sign (and the sock she was knitting), and Ginny was wondering what the heck that sign meant.  She tweeted her question and got back the answer, but more than that she got back numerous responses of "hey, that's the Knitting Lady!".  She was a little perplexed by this, and set out to find out more about this mysterious Penguins fan. 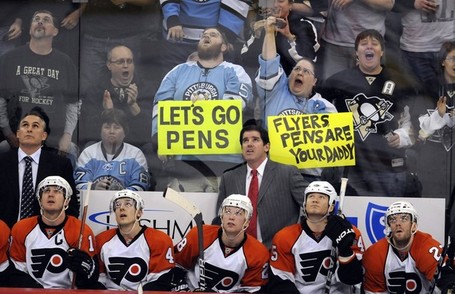 Ginny's search led her to write a piece in her weekly blog for Pittsburgh Magazine's website.  The link is here, in case anyone is interested in reading it:  Five Questions for...Michelle, the Knitting Lady.

Read more after the jump.

In a recent game thread, I took a few commenters to task for remarks they had made about someone knitting at a hockey game.  Curious from this experience, I looked back at some past game threads for similar comments and I found other cases of folks questioning why on Earth someone would pay good money for a ticket to a hockey game only to spend their time knitting.  That question is answered in PittGirl's story.

I realize that in the game threads it is natural to comment about all aspects of the game you are watching, including the fans at the arena.  I think in this case there may have been a tendency to make assumptions about the fan in question, but overall the things that were said were relatively harmless.  Believe me, we have seen MUCH worse on other blogs.  My goal here is to provide some information that might allow folks to form a more educated opinion on this particular subject.

Thanks for your time and enjoy the rest of the playoffs.