Heading into the playoffs, compared to last year

Share All sharing options for: Heading into the playoffs, compared to last year

Since today is Capitals day, and we all are expecting to see them again when the games count, a scholar and gentleman showed how the Caps are different from this season to last season. 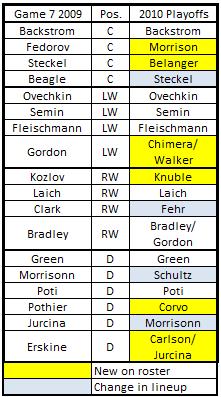 The Caps have a couple of obvious improvements to their personnel from when the Pens whooped them last May, notably Mike Knuble in for Viktor Kozlov and additions of Eric Belanger and Jason Chimera up front.  The defense has been tweaked too, with the addition of Joe Corvo, the presumptive health of guys like Mike Green and Jeff Schultz and the emergence of youngster (and American hero) John Carlson.

A lot of the Caps roles are the same: Alex Ovechkin, Alex Semin, Nicklas Backstrom, Eric Fehr, Tomas Fleischmann and Brooks Laich are all a year older, experienced, better and the ones counted on to carry the offensive load.

Now the natural question, how are the Pittsburgh Penguins are going to look compared to the version last season that played until there was no one left to beat.  Here's a guess on it from the Pittsburgh perspective: 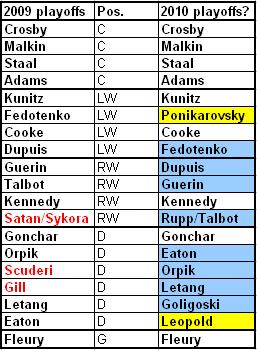 --The obvious subtractions is the "shutdown" defensive pairing of Hal Gill and Rob Scuderi, both of whom of course skated away to sizeable paydays in other markets.  To counter this, the Penguins have shifted roles amongst their defensemen: Mark Eaton bumps up to play with Sergei Gonchar, and Brooks Orpik has paired with Kris Letang to form something of the new age "shutdown" pairing.

--The Penguins may have different roles, but their top 6 defensemen --assuming continued health -- is arguably deeper and better positioned with the skating and puck-moving ability that Alex Goligoski and newcomer Jordan Leopold bring to the table.  While as Gill could barely keep up with the world class skaters he faced, and Scuderi was limited in puck movement, the Pens have upgraded both of those pure capabilities.

--Offensively roles have changed too: Ruslan Fedotenko and Max Talbot have been bumped down from their places last season, with newcomer Alexei Ponikarovsky and Pascal Dupuis appearing to have taken their spots as Top 6 forwards.  Fedotenko and Talbot (regular wingers with Evgeni Malkin last post-season) did put up a combined 15 goals and 12 assists last second season, serious production that will need to be replaced.

--Two of last season's acquistions, Bill Guerin and Chris Kunitz, also find themselves in flux.  Kunitz is now injured (severity unknown) and has been absent for much of the season.  Guerin has lost his place on the top line with Sidney Crosby, but still figures to factor in heavily on a 2nd line and on the power-play.  How both can bounce back this playoffs will probably go a long ways in determining the Penguins fate.

The Penguins strength, as it was last season -- and will be for many years to come, is of course through the middle.  Sidney Crosby led all players in goals last post-season and is currently the league leader in goals.  Evgeni Malkin's had his most trying season, but he showed great jump since returning from his foot injury.  Quietly Jordan Staal anchors a tremendous 3rd line and continues to pitch in and be a force in all three zones.

One thing curiously left off Peerless's chart was the most important position in hockey, that of the goaltender.  Washington figures to switch gears and let vet Jose Theodore (impressively unbeaten in regulation in the year of 2010) take the reigns for the playoffs.  He was also the Game 1 playoff starter last season and got a quick hook after one bad outing.  Clearly a lot of circumstances are different one year later, and though Theodore is playing well, he has the playoff stigma of never getting out of the second round on his back.

Marc-Andre Fleury, while never having sterling success against the Capitals, still has 30 playoff victories under his belt in the last 24 months.  He's made huge saves when it's counted (like stopping AO on the famous Game 7 breakaway) and he also held the high-power Caps to 3 or fewer goals in 5 of the 7 games last spring, giving his team a chance to compete.

On paper alone, Caps 2010 seem to be more balanced and more prepared for the playoffs than they did a season earlier.  But the Pens are also returning 16 of the 19 most important players of their Stanley Cup championship run and are also young, talented and ready for the challenge.  No matter how it turns out, it's sure to be edge of your seat gripping playoff drama.  Assuming, as almost everyone believes and that all signs are pointing to, that these two teams end up meeting in the 2nd or 3rd round of the upcoming Stanley Cup playoffs.