OK, so here's the deal. The season ended a little earlier than anybody wanted, but now that the inital shock of losing has worn off, it's time to look back at each player and break things down. We'll look at how they did over the course of the season and where they stand for next year. These looks are in no particular order and will run each week-day for players who played a significant amount of time this season for the black-and-gold. 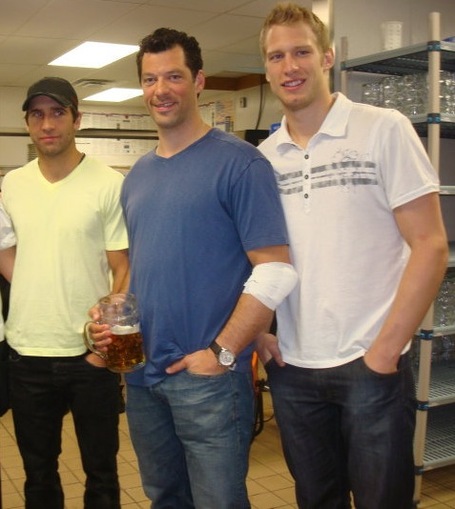 I like to imagine Bill Guerin never doesn't have a beer in hand. (also nice face, Max)

"I meet with them every single day, ... So if I seem a little goofier next year, you'll understand why." -John Bunting (former UNC football coach)

Month-by-month Pensburgh grades:
October: B
November: B-
December: A-
January: B-
February: B-
March: C-
Playoff: B-

Interesting stat: Despite playing mainly first line minutes with Sidney Crosby, Bill Guerin only scored 13 even strength goals in 89 games. Guerin joins Teemu Selanne, Tomas Holmstrom and Brad Richards as the only 20+ goal scorers in the NHL this season to score more power play goals than at ES.

The Good: At 39 years old, Guerin was the undisputed gray beard of the Pitsburgh Penguins. He worked through back and elbow injuries to remain in the lineup for most of the game. Guerin was on the Penguins power play in the role of screening the goalie and doing a lot of dirty work in front of the net to grant the rest of the players more space. Attempt to recall a PP goal scored by the Pens this season and chances are in that highlight #13 is standing right on the doorstep, blocking the view of the goalie and drawing a crowd of defensemen.

The Not-so-good: Even strength production just wasn't there. Guerin scored just 29 ES points and was a -9, indicative that more goals were going in than he was contributing on, a big deal when you're playing top line minutes with one of the league's best offensive weapons in Sidney Crosby. Coming back from his elbow condition, Guerin only had one point (a goal) and 3 shots on goal in the last three games of the Penguins season, it appeared he had worn away to nothing.

Final verdict: Perhaps more than anyone on the roster, you can't just measure Bill Guerin's hard statistics to see his value to the team. He was a great leader in the room for the largely young team, he kept things loose but still maintained a certain sternness and focus. It's not easy to take the net-front role on the PP, but Guerin provided that. For a guy that will be 40 this November, the unavoidable question is if he's willing and able to endure the rigors of another NHL season.

Question: Will Guerin be back? He accepted an over 50% pay-cut to return to the Penguins in 2009-10 and with the team again dealing with salary cap restraints, he'd likely have to take another reduction in salary. Have Guerin's skills eroded to the point where he's not a viable Top 6 winger for a team that intends to contend for a championship or is his total efforts (on and off the ice) enough to make him a priority?

Debate and Vote: As a fan, would you accept Guerin back next with the black-and-gold next season? Or is what he brings to the table on the ice just not enough to justify giving him a roster spot and a salary for a team that may be in a slight transition?